The news came as a surprise on Friday, but Ellen DeGeneres will be hosting the 2014 Oscars. This will be the second time she helms the awards show. 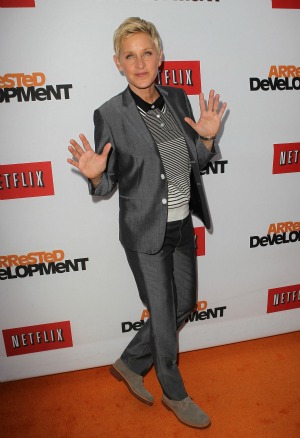 Daytime’s funniest lady is going to head back to host Hollywood’s biggest night. On Friday, Ellen DeGeneres announced via Twitter that she will be hosting the Oscars in March 2014.

The Ellen Show host actually trumped The Academy of Motion Picture Arts and Sciences with the news. The official press release announcing the news was sent about 10 minutes later to the press.

Producers of the 86th Annual Academy Awards, Craig Zadan and Neil Meron, shared their excitement in a statement.

Catch up with Oscar noms on DVD >>

They said, “We are thrilled to have Ellen DeGeneres host the Oscars. As a longtime friend, we had always hoped to find a project for us to do together and nothing could be more exciting than teaming up to do the Oscars. There are few stars today who have Ellen’s gift for comedy, with her great warmth and humanity. She is beloved everywhere and we expect that the audience at the Dolby Theatre, and in homes around the globe, will be as excited by this news as we are.”

DeGeneres had the last word, though.

She quipped, “I am so excited to be hosting the Oscars for the second time. You know what they say — the third time’s the charm.”

The comedian previously hosted the Oscars in 2007 to generally favorable reviews. Returning producers Zadan and Meron had tried to lure this year’s Oscars host, Seth MacFarlane, back to the show, but he cited his busy schedule as the reason he couldn’t do it again. However, The Family Guy creator had always maintained that he would only host the show once.

DeGeneres brings a less edgy comedic style to the show, so perhaps the critics who didn’t enjoy MacFarlane’s rendition of “We Saw Your Boobs” will be quelled this year.

The Oscars will be presented on Sunday, March 2, 2014, at the Dolby Theatre in Hollywood, California.