Regardless of the feelings Rihanna has for her ex-boyfriend, it has been reported that she wants nothing to do with Chris Brown. 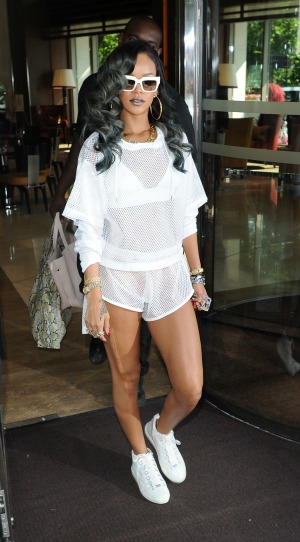 Rihanna has recently claimed that she is sick of all of the drama that surrounds her ex-boyfriend Chris Brown.

The “Umbrella” singer is taking a break from her Diamonds World Tour and will be going to Los Angeles, although she has no plans to meet up with her former boyfriend.

Brown and Rihanna created headlines when he beat her up in 2009. The pair endured a passionate and turbulent romance, which was recently rekindled. Although, now it seems that it is all over for the former couple.

A source has told HollywoodLife.com: ”She’s cool on all his drama. Nobody has time for that. Life is way too short, and it’s just better to cut the losses now and move on.

”She’s cool without him. She was Rihanna before him. No shade, but it’s cool. She loves him and wants him to be great.

”Her relationship with Chris was good, bad, happy, sad, beautiful and ugly. All that she had with him taught her a lot.”

However, after Rihanna split from her on-again, off-again boyfriend, she posted a message online, which read, “I hate it when ex’s say ‘I’m here if you need me.’ Where the f*** were you when we were together and I needed you.”

Brown recently made headlines after his probation was revoked for an alleged hit-and-run incident.

The singer also was previously involved in a messy love triangle with Rihanna and his former girlfriend Karrueche Tran. It seems that he would also like to be single for a while.

Brown told HollywoodLife.com: ”[Fans have] seen me on and off again with different girls, you know who they are, but right now, as a 24-year-old man, I just choose to be single!

”I’m still good friends with them. [Now] it’s just me being focused with my music and doing this stuff. Right now, I’m in my prime.”