In this episode of Burn Notice, called “Nature of the Beast,” Michael and Sam work together to get on James’ good side, while Fi and Jesse help Strong track down an asset with some very useful information about their quarry. 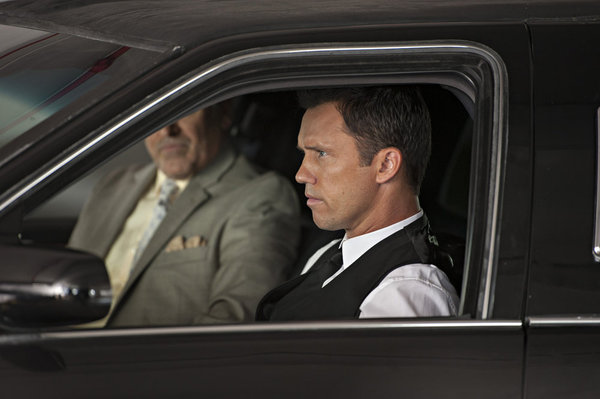 When last we saw Michael (Jeffrey Donovan), he had barely recovered from the torture he endured in last week’s episode. In this episode, Michael jumped right back into the action when he (with a whole lot of CIA agents in tow) attempted to meet up with James and let the guys in white hats capture the guy in the black hat. Seeing as how there are still at least five more episodes left this season, there was no way it was going to be that easy and of course James skittered out from under the CIA’s grip.

In order to keep up his cover, Michael took a job for James and went on the hunt for a “monster” (as James called the man). Sam (Bruce Campbell) went along to help, but as they used their usual amount of wit, experience and intelligence to get the job done, they also had more than a few moments of disagreement. Sam wasn’t happy with the amount of risks that Michael was taking and though Michael admitted he was sorry he had gotten Sam involved, he still wanted to get the job done. But after a while, I wasn’t sure if Michael wanted to do it to make sure his friends didn’t end up in a hole or if he was starting to think that James had a point about wanting to destroy bad guys rather than negotiate with them.

Meanwhile, Jesse (Coby Bell) and Fi (Gabrielle Anwar) were sent to chat with a man who was obviously close to James (after all, James was paying to keep him in a mental institution). What started as a simple mission blew up when their mental patient turned out to be special ops and kidnapped Jesse. Luckily Jesse was able to talk Peter down and also got a very important piece of intel out of him — James’ last name.

With that, Michael was sent to have a chat with Peter and discovered the brutal truth about James. It seemed that the man Michael thought might have some good points about dealing with bad guys was in fact a man who murdered his entire unit so that he wouldn’t have to follow orders. Was it right that he was asked to kill a village of innocent people? Of course not, but the way he chose to handle the situation makes him one scary dude.

The waitress handing Michael the phone with his nephew’s picture on it. Oh boy.

“You didn’t want to throw a train in for good measure?”

The whole talk between Maddie and Fi.

“Why would he jump ship now?”
*Michael opens a suitcase full of money*
“Well, that’s a start.”

Michael proving to Cabral that trying to steal the money would be a very bad idea.

“This isn’t about giving up, brother, this is about facing reality.”

“I’ve been in bumper cars with more leg room than that thing.”

“I prefer my trained killers on the sleepy side.”

Michael in a wetsuit. That is all.

Sam frantically running to the water to make sure Michael was OK.

Sam pointing out to Michael that being stuck in a hole was better than dying face-down on some mission.

Michael in the chauffeur vest. Me likey.

“Of course, it’s a lot harder to connect with someone who happens to be criminally insane.”

“How’s Cabral doing back there?”
“He’s sleeping like a heavily sedated baby.”

“OK Mike, you got 50 feet to cover, your hands are tied, you’re wearing a head bag. You feeling lucky?”

Sam telling Mike that he didn’t always enjoy their little tropical vacations, but at least they were never dull.

What did you think when you heard the truth about James’ past?