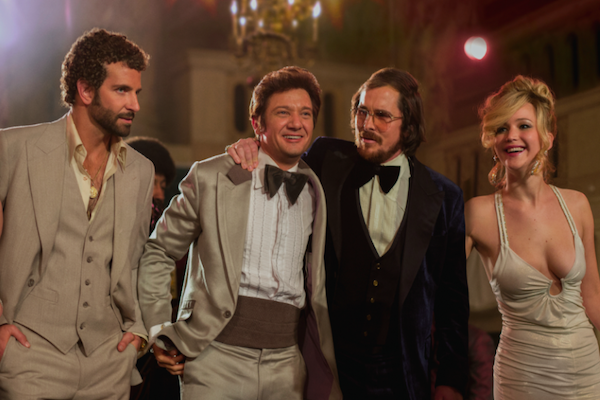 Christian Bale and Amy Adams, who starred in Russell’s The Fighter, appear alongside Jeremy Renner. This acting pool is a sight to behold. Both Bale and Lawrence are Oscar winners, while Cooper, Renner and Adams are nominees.

American Hustle is a period drama, circa the 1970s, which consists of aviator glasses, bell bottoms and bad perms. The film follows con-man Irving Rosenfeld (Bale) and his partner in crime Sydney Prosser (Adams). They’re forced to work for FBI agent Richie DiMaso (Cooper), who uses them for an undercover sting.

Carmine Polito (Renner) is a political figure caught between the Feds and the underworld. Meanwhile, Irving’s unpredictable wife Rosalyn (Lawrence) threatens to ruin their whole operation. Oh what a tangled web we weave. It sounds as if Irving’s got his work cut out for him.

In the film’s first trailer we’re introduced to the glitz and glamour of the disco era. The actors completely disappear in their characters. Bale’s hardly recognizable with his shaggy hair and glasses, while Cooper’s about as far from the Sexiest Man Alive as you can get.

Check out the first trailer for American Hustle:

What do you think of the first trailer for American Hustle?