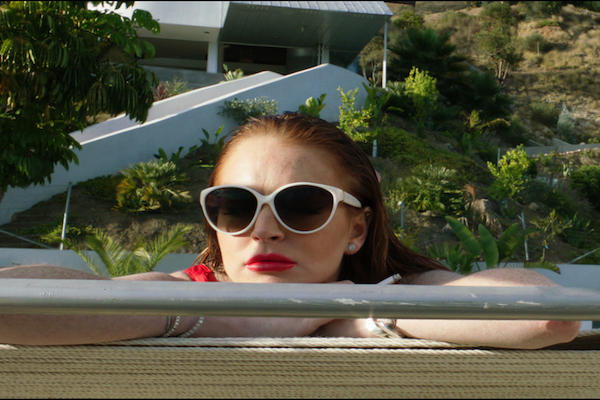 Bret Easton Ellis (author of American Psycho and Less Than Zero) penned the script for this movie, which was directed by Paul Schrader (screenwriter of Taxi Driver). The team put up $70,000 of their own money and then raised $160,000 on Kickstarter to fund the film — less than a shoestring budget, even by indie-film standards. This micro budget is relevant and exciting when you consider bloated movies, like the $250 million The Lone Ranger, that have tanked miserably at the box office. Perhaps with these nano budgets, Hollywood may again take risks — at least we hope so.

The Canyons opens with a montage of dead and dying movie theaters shot in saturated colors. Schrader seems to suggest these dead carcasses are all just casualties of the recent war on our culture, happily waged by rapidly progressing technology. Given that this film opened in only one actual brick-and-mortar cinema but can be viewed on VOD from your iPad, the imagery is apropos. And that brings us to Lindsay Lohan.

Miss Lohan is 27 years old. By Hollywood’s skewed timeline, she should still be playing high school–aged characters — but at less than 30, she’s a has-been. Notoriously difficult to wrangle, the actress has been in and out of jail/court/rehab more than most Angelenos eat at In-N-Out Burger. But like the old, decrepit movie theaters depicted in the opening shots, Lohan has a faded beauty, a glorious past and an uncertain future — making her a perfect casting choice. 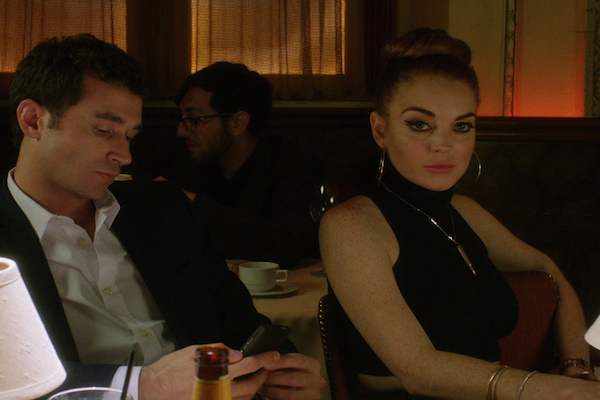 Tara (Lohan) lives a life of luxury but doesn’t seem to find fulfillment in her relationship with Christian (James Deen), a rich trust fund baby with a sexual appetite for video trysts involving Tara and male or female strangers he’s plucked from the Internet. This is writer Bret Easton Ellis’ stomping ground — a community of rich Los Angeles kids with nothing to live for but the hope of one day experiencing something meaningful, if they don’t self-destruct first.

But maybe Tara’s ennui isn’t due to Christian’s objectification of her. Maybe it’s a result of having chosen a life of being kept over a life of being loved. Tara’s ex, Ryan (Nolan Funk), is a struggling actor with a new girlfriend, Gina (Amanda Brooks) — but he still loves Tara and urges her to leave Christian.

But relationships are complicated, and Tara values financial security over seemingly petty things like love and monogamy. When Tara convinces Christian to cast Ryan in a horror movie he’s producing, Christian uncovers Tara’s past devotion to Ryan. Christian sees their spark and doesn’t like it. It’s as if Christian wants to control not only Tara’s present and future but also her past by punishing those involved in it.

While there are a lot of people having sex in The Canyons, no one really seems to enjoy it. This is particularly true of Christian, who spends his days videotaping his wife having it with others because he likes the feeling of having something (Tara) that other men want but can’t have — at least not for more than a few minutes. 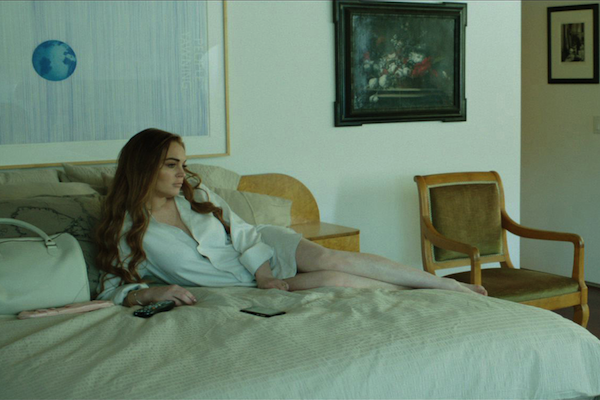 Many people may disagree, but I believe Lohan to be an incredibly gifted actress with a dynamic inner life that fills the screen even when very little is going on externally. The camera can always check back to her face — her vulnerable eyes revealing her strong discomfort in her own skin. Perhaps Lohan’s talent has less to do with acting and more to do with crawling completely into another character to find a relief she can only otherwise find while being intoxicated.

Indie director Gus Van Sant (My Own Private Idaho, Milk) plays Christian’s psychotherapist, counseling him about his need for control and thus expanding on the movie as a metaphor for relationships.

Bottom line: The Canyons starts slowly, but as the currency of sex becomes more and more inflated, the intensity ramps up to a fervent, psychological climax you won’t want to miss. Enjoy.