Matt Damon talks on the Today show about how he spends his whole life trying to be like Brad Pitt (sort of). 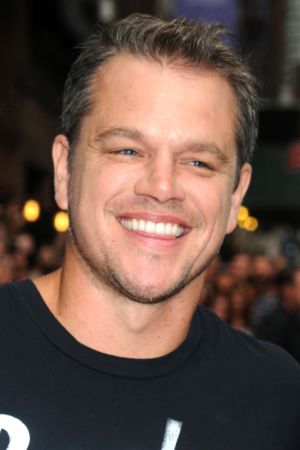 Matt Damon’s new film Elysium is being released this week and he stopped by The Today Show to talk about the flick and the friendly rivalry between him and Brad Pitt.

First up, Damon spoke about how he knew that other big names had often seen scripts before he had. “It is kind of rare that you get something directly from somebody. You know somebody else has seen it, but you tend not to ask,” he said.

One rumor going around was that Eminem had been considered for the role. “Yeah, I read [that], too,” Damon revealed.

Damon doesn’t like to dwell on who may have had their hands on a script before him. “It’s like asking your girlfriend about her ex-boyfriends. It doesn’t have any bearing on your relationship,” he said.

Talking about going from his last film Behind the Candelabra (where he played Liberace’s young boy toy), to a sci-fi heavy film like Elysium, Damon said that, for him, it’s all about finding a great director.

“I’ve been really lucky to work with the directors that I’ve worked with. It’s always about the director. The material is obviously important, but I’ve come to realize if you place a big bet on that director and follow them from project to project, things tend to work out.”

Damon and pal Ben Affleck recently began their own production company. Will that help them to get the best projects in Hollywood? “Yeah, it’s one way,” Damon replied. “Particularly because we both write. Together we can aggregate a lot of really good stuff and get books before they’ve come out and [develop] some really good projects together. The best way to do it is to hang out our shingle in a more official way.”

Finally Damon was asked about the comments he made in the August 2013 issue of Esquire about how Brad Pitt was jealous of his fame. When the question came up, Damon laughed at the implication and quickly cleared the air.

Matt Damon: Angelina Jolie is the sexiest woman on earth >>

“[What I meant was] the fact that I can walk my kids to school and not be hounded by photographers. That’s it, what else is there to be jealous of?”

The actor was also asked about his spot-on Brad Pitt imitation, but apparently it’s not something he really tries to do. “I don’t [try to sound like him]. Brad sounds a lot like me.”

With another laugh, Damon joked, “I spend my life trying to be like Brad Pitt.”