Karmin have an incredible blend of vocals, acoustic talent and theatrics that have taken the pop genre by storm, but here are some facts you may not know about them. 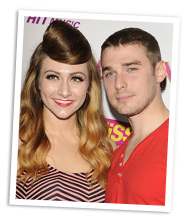 Find out
about Karmin

Karmin have an incredible blend of vocals, acoustic talent and theatrics that have taken the pop genre by storm, but here are some facts you may not know about them.

Karmin, the quirky pop duo made up of Amy Heidemann and Nick Noonan, are best known for their lyrical speed and upbeat tracks, which have been steadily climbing the charts.

The duo got their start on YouTube by rearranging hits and singing pop and rap covers from artists such as Chris Brown, Nicki Minaj and Katy Perry.

That was until they got the attention of music executives and the adoration of the public!

You most probably know them for their musical brilliance on hit tracks such as “Brokenhearted” — which tells the story of how Heidemann and Noonan first met — or maybe you love “Hello” — which has been described as a new sound.

However, here are 10 things you probably don’t know about the duo that are Karmin.

They are a couple in real life! They met and formed the band Karmin while studying at Berklee College of Music in Boston. Their musical chemistry turned romantic and they are now engaged.

The band’s name “Karmin” is a hybrid of the word “carmen” which in Latin means “song” and “Karma.” (The “K” represents Karma.)

Noonan told YHP online: “After we decided to form the band, we spent two months trying to decide on a name. We wanted something simple, but the Beatles was already taken.”

Both Heidemann and Noonan are left-handed and their birthdays are only two days apart. Nick Noonan’s is April 27 and Amy Heidemann’s birthday is April 29. All these similarities make the pair seem destined to be together!

They both hail from small towns with populations under 10,000: Amy grew up in Seward, Nebraska, and Nick is from Old Town, Maine, but the pair managed to find each other.

Karmin has shown the world they can do original music and their track “Take it Away” was used in the 2011 NBA Finals promos.

Their YouTube channel Karmincovers views are already hundreds of millions and they have 1,310,251 subscribers.

YouTube has allowed them to build their fan base and get recognition. We think you should check them out and add to that number!

They’re heating up this summer because they are releasing a new album, and the duo have announced a tour with the Jonas Brothers.

Amy was born and raised in Nebraska and wasn’t allowed to buy CDs with parental advisory stickers! She had to have a boyfriend steal her first rap CD.

Their musical influences include Lauryn Hill, as she is a female artist who raps and sings.

Heidemann said on Karmin’s official site, “I also love Brandy, Alicia Keys, Gwen Stefani, Christina Aguilera and Alanis Morissette, although her album had a parental guidance sticker on it, so I wasn’t allowed to own it growing up.”

What do the duo want from the future? Karmin want to spread a positive message and give others something to smile about. They also want everyone in the world to hear their music! Ambitious, energetic, charismatic and soulful: This duo is worth a listen.