From the pranksters who brought you Jackass, comes Bad Grandpa. Paramount’s released the first trailer for the film that centers on an old man behaving badly. 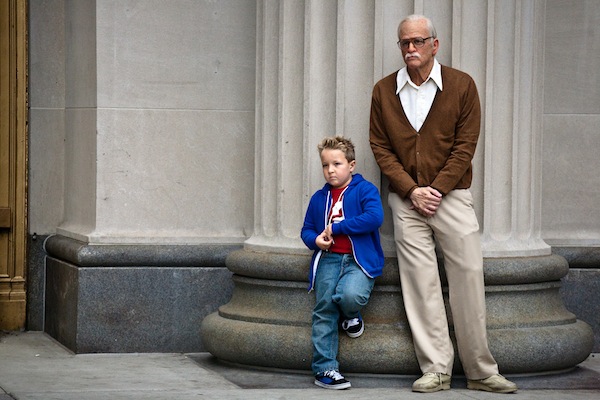 Johnny Knoxville isn’t done with practical jokes. He’s taken one of his most famous Jackass characters, and given him a spinoff. Knoxville reprises the role of Irving Zisman in this year’s Jackass Presents: Bad Grandpa.

The title’s self-explanatory but there’s so much more to the character. Irving’s not alone in his hijinks, he brings his grandson Billy (Jackson Nicoll) along for the ride. Bad Grandpa follows the troublesome duo as they trek across the country wreaking havoc.

MTV to Let Johnny Knoxville and Crew Take the Wheel >>

It’s an insane road trip where every moment’s captured on camera. Irving uses this time to bond with Billy. He introduces him to different people, places and situations that he wouldn’t normally be exposed to.

Jackass: Johnny Knoxville Is Caught With A Grenade In His Suitcase >>

In typical Jackass fashion, innocent bystanders will be targeted. No one is off limits. Irving crashes weddings, funerals and windows with no regard for human life. He’s not the best example for little Billy, but he’s the only one he’s got.

In the following trailer, you get a first look at Bad Grandpa in action. We’re amazed at how Knoxville’s able to stay in character during his pranks. It doesn’t matter how bad it gets, he never breaks. For that, we’re not sure if he should be reprimanded or applauded.

What do you think of the first trailer for Bad Grandpa?