Anna Gunn and Bryan Cranston talk about a couple of their favorite scenes to shoot as Breaking Bad heads toward its finale. 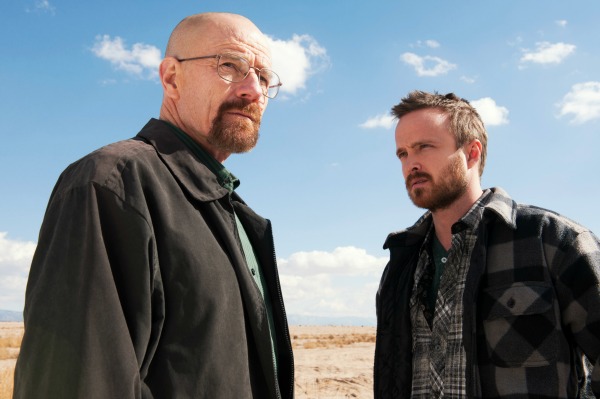 The cast and creators of Breaking Bad sat down for a webcast panel to discuss their feelings as the show enters its last season. Bryan Cranston, who plays Walt on the series, let a couple of spoilers out about a possible ending for Walt during the panel. But it wasn’t all about spoilers as some of the cast looked back on their thoughts about some of the show’s most iconic scenes.

Anna Gunn (who plays Skyler White) spoke about the scene where her character was underwater. “I actually had to overcome some fears with that,” Gunn said, adding that she also had to undergo training for the scene. “I had to be trained by our wonderful stunt people with the regulator, and I had to learn to breathe underwater. They rigged this amazing cage, with the skirt billowing around my head, for that wonderful effect.”

The late-night shot took a lot out of Gunn. “I think it was about 4:30 in the morning when we finally did that shot. I had to close my eyes and two guys had to drag me underwater and put me in that cage and I had to overcome some stuff for that,” she revealed.

Gunn did enjoy some of it though. “But I was excited, I thought, ‘I finally get to do a stunt.'”

Bryan Cranston spoke about the famous “I am the one who knocks” scene and was quick to point out that it was all thanks to writer Vince Gilligan. “We are the mouthpieces of this man’s sick and demented mind,” Cranston said, eliciting a laugh from the audience.

Cranston talked about what that scene meant to his character. “What I gleaned from it was that Walter White was going on a transformation — going through a metamorphosis as a character — and at that particular point he was becoming more emotional and more impulsive,” Cranston said.

The actor said that he felt that Walt’s ego was increasing at that point and that his ego became Walt’s Achilles’ heel, but Walt had to “lay it on the line and tell her just how powerful a man [he was].”

Gunn added that she felt the scene was an important moment between the two characters and that it actually led all the way back to what happened between the couple in the pilot. “She’s trying to control things because that’s what she knows how to do as a human being. She tries to control inner chaos. So when she offers up this thing to him, she thinks she’s offered up a solution to him finally and he says ‘You don’t control me. I’m not controlled by anybody, especially you.'”