Kristin Chenoweth may seem sweet, but she sure stuck it to Anthony Weiner on The Tonight Show with a parody of a song from Wicked about his sexting scandal. 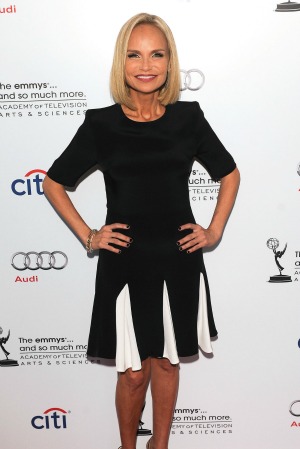 She may be small, but she sure carries a powerful punch. Tuesday night on The Tonight Show with Jay Leno, Kristin Chenoweth sang a humorous ditty about New York mayoral candidate Anthony Weiner.

The scandal-ridden politician just can’t seem to keep his “weiner” in his pants and he is now defending his candidacy over the sexting issue. While poll results have found that New Yorkers are starting to withdraw their support for the former congressman, it is clear where Chenoweth stands.

American Airlines is in the doghouse with Kristin Chenoweth >>

Dressed in a white, sweetheart-neckline dress, the Tony winner sang a parody of her well-known song “Popular” from the hit musical, Wicked. The performer originated the role of Glinda on Broadway in 2003.

The petite singer changed up the lyrics to incorporate some sage advice to Weiner instead of the usual lyrics about helping a friend become well-liked in the Wizard of Oz parallel story.

She sang, “You will be popular/the right kind of popular. I’ll teach you to zip your fly/you won’t be that guy with a camera down his pants.”

Even Weiner’s beleaguered spouse, Huma Abedin, who has chosen to forgive her husband for his indiscretions, made an appearance in the song.

Chenoweth advised, “She should take a page from Hillary. And become independent of her hubby/while you sport a chatroom chubby.”

As an aside, the former Pushing Daisies actress gets in the final word to Abedin, “Seriously Huma, if that guy doesn’t zip up and unplug, just kick him to the curb.”

While Hillary Clinton’s political staffer probably won’t take the Broadway star up on her advice, it definitely should give her some food for thought.