The former American Idol winner and his wife have had a tough year, but everything just got a whole lot better with the birth of their first child. 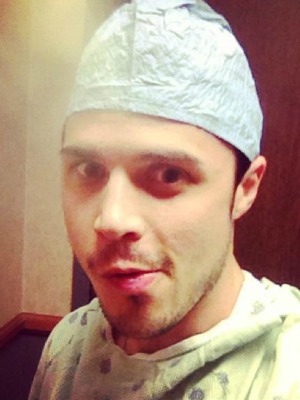 American Idol winner Kris Allen is a father! The singer and his wife Katy welcomed their first child on Tuesday, a baby boy.

Allen posted a photo of himself in hospital scrubs, saying, “My outfit for the day.”

Allen and his wife announced back in January they were expecting a child.

“I am really excited. I’ve always wanted to be a dad,” Allen said at the time. “My wife already started buying him clothes like me. He’s already got some [fedoras].”

Allen and his wife are celebrating their happy moment after a year full of heartache. They were involved in a serious car crash back in January, in which Allen was injured.

“Thank you, Ford, for equipping me with a car that kept my whole family and the little one we have on the way safe,” he tweeted back in January. “Yes, I got in a really bad wreck tonight, and yes, I’m having a lil baby.”

Is there a curse on male American Idol winners? >>

According to People, he shattered his wrist and has undergone at least three surgeries. Allen said he will never fully regain movement in his wrist, but it won’t affect his passions.

After Oliver was born, Allen shared the news of his great day, which apparently just kept getting better and better.

Allen’s announcement came on the same day another American Idol star announced his own bundle of joy was on the way: Simon Cowell’s rumored girlfriend is expecting a child.

Allen and his high-school sweetheart Katy have been married since 2008.