This stunner isn’t just a pretty face. Kat Graham has always had a strong musical presence to back up those acting chops, but this remix may give her staying power. 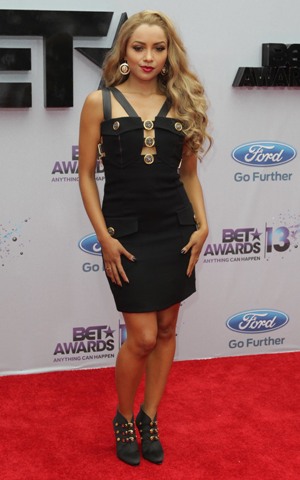 You know how you feel when your favorite actor dabbles in music? Or vice versa? You have a mix of feelings — some hope, some anxiety. What if he/she fails? What if they taint their reputation with a lackluster performance in either arena?

Jennifer Lopez did it most successfully, I think. And others, like Selena Gomez, Scarlett Johansson and Gwyneth Paltrow all tried their hand at dual roles. What do you think, readers: who succeeded and who flopped?

Although that’s another rainy day discussion, those thoughts were in my head when I first discovered “Bonnie” from The Vampire Diaries was in hot pursuit of a music career. She’s worked on music and acting, but her first love was dancing. All those talents combined make her a fierce force.

Can’t wait for The Vampire Diaries Season 5? See what Julie Plec had to say about it! >>

So as lovely as that sounds, where does Kat Graham fall with the remix for “Power” by Lovelife?

Right into my top 10 playlist.

This isn’t me playing favorites just because I have a TVD obsession or admire this diva’s style (I do) ? the song actually has some serious marketability.

It’s a cross between Demi Lovato‘s “Heart Attack” and a Leona Lewis single. When you get a chance, readers, let me know what it reminded you of. The fact that we’re even having these discussions means not only is Kat showing great promise, but that she’s finding her niche as an artist. Not to mention she also sounds more earthy and wise.

Want to see who wins in a Miley Cyrus versus Kat Graham battle? Check it out here >>

Maturity and progress as a result of one song? Impressive.

But let me answer the question that I think most of us had before we heard the remix: Is it better than the original?

Need other music news questions addressed? Sign up for our newsletter and stay up to date! >>

Yes! But that isn’t an attack on the songstress. This aggressive, sassy-electro remix just highlights her potential, and I wouldn’t be surprised if this facilitates the kind of collaborations that could make her career skyrocket. Lee Newell of Lovelife claimed of the song, “[It’s] dark dancehall via ’90s garage.”

Drop a comment below and let us know your take.