Recently, SheKnows had a chance to talk to Emblem3’s Keaton Stromberg to find out how the group got started, what it’s like being nominated for a Teen Choice Award, and which celebrity he’d date if given the chance. 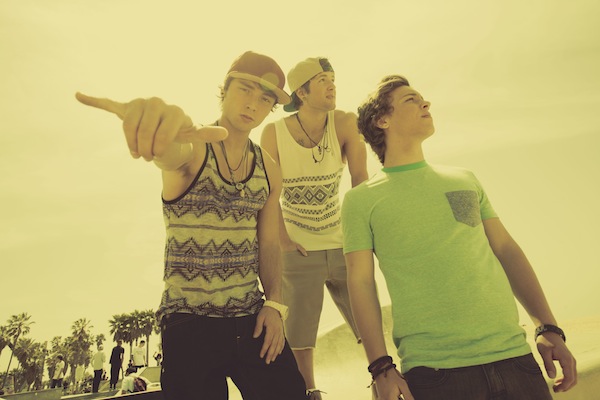 It’s hard to imagine that seven short months ago, Keaton Stromberg, 17, his brother Wes, 19, and their best friend growing up, Drew Chadwick, 20, were on the U.S. version of The X Factor. However, the journey for the band Emblem3 started a long time before reality TV stardom.

Emblem3 to release new album and go on tour >>

SheKnows had a chance to talk to Keaton, who explained that Wes was the catalyst behind the band.

“We were approximately like 9 when Wes kind of said you’re going to be in my band. We all had a passion for becoming a rock star.”

But becoming a rock star isn’t everything a 9-year-old thinks it is.

“It’s really just a lot of work. You have no idea how hard it’s going to actually be. We’re literally going nonstop. You have to be on every single day and ready for whatever they throw at you. It’s awesome.”

And for guys who have been doing their own songs for more than 10 years, one of the biggest challenges they faced was covering other people’s songs on The X Factor.

With the release of their new album Nothing to Lose, there are quite a few challenges ahead for the young stars, but they are taking it all in stride.

“There are a lot of challenges. Nowadays, having to constantly be on and be nice to everybody and always be smiling even if there is something bothering you. That’s probably one of the hardest things. You always want to do great and have a blast because everything is amazing.”

For three young guys fresh off of a reality competition show, Nothing to Lose is a fitting title for their debut album.

Says Keaton, “Basically when we went on The X Factor we went with the mind-set that we don’t really have anything to lose.”

The guys co-wrote most of the songs on the new album, pulling inspiration from the world around them, but that doesn’t mean it’s easy to categorize this album into one specific genre.

“It’s a pop record, but it also has a lot of influences. It’s got a really beachy vibe,” he says.

When listening to the album, that beach/rock vibe comes through — transcending the current pop music we are so used to hearing on the radio. Keaton attributes that to the album’s production with live instruments rather than pre-produced computer-generated sounds.

“It’s got more of an organic feel to it,” Keaton says. “There’s a lot of acoustic guitar and then all three of our voices have different tones, so it gives it a really unique sound.”

The guys are nominated for the Choice Music Breakout Group at the Teen Choice Awards and they are up against some stiff competition. Also nominated are Icona Pop, Imagine Dragons, The Lumineers?, and Macklemore & Ryan Lewis.

“We were at our manager’s office when we found out [about the nomination]. We freaked out and jumped around like we usually do. It’s just such an honor to be up against Macklemore and Imagine Dragons. It’s crazy.”

Keaton is hoping all of the fans will go online and vote for them at teenchoiceawards.com. Voting is open until Aug. 10.

Along with the nomination, the guys were asked to present at this year’s awards show, but Keaton insists even though they’ve never done anything like that before, they aren’t nervous.

“I actually have no idea what were going to do,” Keaton says as he laughs. “We’ll just have fun with it and be ourselves.”

Now that the guys are no longer unknowns from Washington state, they have had a chance to rub elbows with some pretty big names. Among their favorites is Ed Sheeran. Keaton says, “Ed Sheeran is super cool.”

Up next, Emblem3 are joining Selena Gomez on the Stars Dance Tour. They had a pretty great time getting to know her.

“We went to Disneyland actually. We just hung out and had fun and rode all the rides and got to know her. She is really, really awesome. I am excited to go on tour with her.”

Selena Gomez tries sexing it up in her new video >>

And even though Gomez’s best friend is Taylor Swift, Keaton said we shouldn’t expect any of the guys to be her next beau.

In fact, Keaton has set his sights a bit older. If he could date any celebrity, who would it be?

So, Keaton likes a quirky girl, huh? Well, he’ll probably have to wait until he’s 18.

The guys of Emblem3 have a long career ahead of them. While their debut album is out now, Keaton is already looking to the future.

“Eventually, we’d like to write an album that’s completely just us and hopefully we’ll get to do that. It would be awesome.”

Check out Emblem3 singing an acoustic version of their track “Sunset Blvd” off their debut album Nothing to Lose available now. Let us know what you think in the comments below.