Dina Lohan is facing controversy after she gate-crashes a charity event and demands another seat for her guest, her Prada handbag. 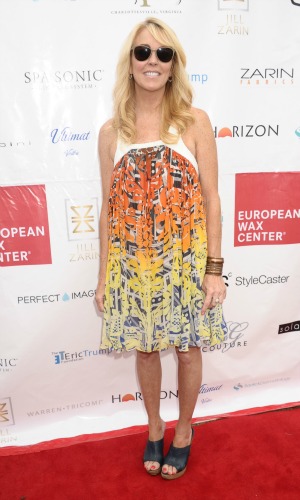 Dina Lohan, the mother of troubled star Lindsay Lohan, reportedly gate-crashed an event with a friend in The Hamptons, Long Island, New York, on Saturday, July, 27.

The pair insisted that they had bought tickets for the Art for Life benefit — even though there was no record of the purchase — and eventually persuaded the organizers to let them in.

Once inside, Dina Lohan’s behavior was bizarre, and she stunned guests seated at her table when she requested another seat, for her Prada handbag!

A source told the New York Post: ”Organizers seated them because they didn’t want drama. She was on a pretend phone call with ‘her publicist.”’

“After being seated she was overheard asking a guest to move up, saying: ”My Prada deserves its own seat.”

The showbiz matriarch certainly wanted to be seen as she happily posed for several photographs at the event and then rather hypocritically stated that she continually tries to convince her daughters — Lindsay and Ali — to stay off social networking and picture sharing websites.

Dina Lohan reportedly told a guest: ”I don’t have Instagram. My daughters do. They post pictures of themselves all the time. I’m like, ‘OMG, stop doing that!”’

Lindsay Lohan is believed to have completed her 90-day court-ordered rehab stint today, Wednesday, July 31. The actress also has a post-rehab documentary series exclusive planned with Oprah Winfrey that should reveal some interesting information about the young star’s life.