Taylor Lautner never stays single long, and this time is no different. It looks like he has found his newest girlfriend on the set of his new movie. 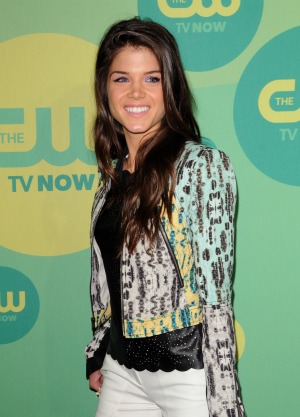 It appears that Taylor Lautner is once again off the market. The actor has been seen out and about with actress Marie Avgeropoulos.

The men of The Host vs. Twilight smackdown: Who’s hotter? >>

The Canadian-Greek actress is Lautner’s co-star in his current film, Tracers. According to USA Today, the couple hit the streets of New York holding hands Monday, possibly worrying Twihards everywhere. They even stopped in numerous locations in the city to take selfies.

Avgeropoulos was born in Ontario, Canada and moved to Vancouver as a teen to be a star. She landed her first role at the age of 21, and has since appeared in numerous movies and TV shows including 50/50, Eureka, 90210, Fringe and I Love You, Beth Cooper.

Which ex is Taylor Swift’s new song about? >>

Lautner and Avgeropoulos were first rumored as a couple earlier this month when they were spotted out at a Blue Man Group show, where he showed what a gentleman he really is.

“Marie, who’s on crutches due to a leg injury, had a tough time getting back up to leave,” a source told the New York Post. “After she tried to climb the stairs alone, Taylor allegedly picked her up and put her on his back. He carried her up piggyback.”

The couple was seen out at dinner July 24, where a friend said they were very loving toward each other.

“They held hands during the meal and were very affectionate, laughing and having a good time,” the source told Us Weekly. “They were very cute together.”

In Tracers, Lautner plays a bicycle messenger in New York who experiments in the world of parkour after meeting Avgeropoulos’ character. He has been filming by riding his bike all around the city, playing a character being chased by the mafia.

Team Edward or Team Jacob? What your Twi-crush reveals >>

Twilight fans have to be used to hearing about Lautner dating news by now. Despite previous rumors that Lautner might be gay, the actor has recently dated (or has been rumored to have dated) Selena Gomez, Taylor Swift, his Abduction co-star Lily Collins and Los Angeles Clippers cheerleader Sara Hicks.