The late-night talk show field is about to become even more crowded with Arsenio Hall’s big return to television. Watch out, David Letterman! 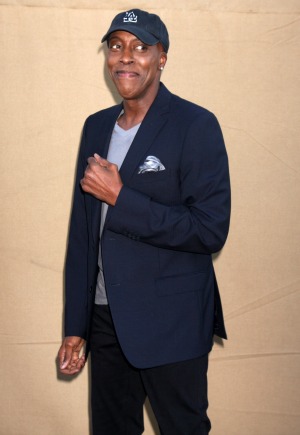 The late-night talk show race is heating up again. All of the news has been aimed at NBC with Jay Leno retiring, Jimmy Fallon replacing him and Seth Meyers jumping into Fallon’s old timeslot. There is one guy everyone is forgetting about, Arsenio Hall.

The host is heading back to television after his departure in the mid-1990s. His original late-night show ran from 1989 until 1994 and it was the pop culture phenomenon of its time.

“It’s a huge challenge this time to bring people to the television,” the comedian said. “Your biggest fan doesn’t watch you every night. You hope to get a guy three nights to check you out, the other nights they’ll be catching someone else.”

In the era of DVRs and hundreds of cable channels, viewers have many choices. In addition to Fallon, fans can choose to watch David Letterman, Chelsea Handler, Andy Cohen and Jimmy Kimmel all in the same time period.

Hall shared, “I’m trying to be in the game. I just got to be better than one guy that’s there.”

The syndicated Arsenio Hall Show is scheduled to debut on Sept. 9 and will be seen on over 200 outlets across the U.S. Hall mentioned that the first guest is not booked yet, but there will be a few familiar touches for fans of his old show including an updated theme song.

He didn’t reveal any news on whether the studio audience will still be referred to as “the Dog Pound” and if the iconic arm-waving “woofing” will be back, but he set the stage for a fun return.

Hall promised, “It’s kind of the same Arsenio you know — less hair, less shoulder pad — but inserting myself into this culture of music, comedy, pop and hop.”