Jennifer Aniston gives her younger self some advice that anyone can use to be happier. 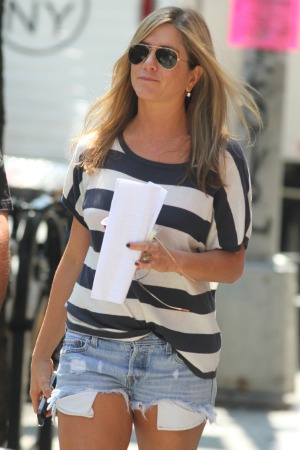 Jennifer Aniston has got plenty to be happy about right now. Her new film We’re the Millers is set to release on Aug. 9 and she’s looking hotter than ever in the movie’s trailer. Plus, she’s engaged to the man of her dreams and the wedding plans are moving along nicely. She’s even thinking about inviting her estranged mother to the ceremony.

Aniston recently sat down with Glamour magazine to answer questions in an interview conducted by her We’re the Millers co-star Jason Sudeikis.

In the new film, Aniston plays a woman pretending to be a mother, and apparently her motherly instincts were quite obvious. Sudeikis said he noticed on set that Aniston had very maternal instincts with co-star Emma Roberts. “I did. But she’s wise beyond her years,” Aniston replied. When asked if it was a role she grew into or if she had been doing it all her life, Aniston said, “I think I’ve done it all throughout my life.”

Aniston is also a good friend to other ladies, too. Sudeikis talked about how Aniston is known as being “such a gal’s gal” and how the actress throws many parties and get-togethers for her friends. “I love doing that,” she replied.

Sudeikis also thanked Aniston for being there for his own special lady, Olivia Wilde. Last year, Wilde received flak for a monologue she performed and Aniston wrote her an email giving her support.

Aniston said she wrote the email because she felt very strongly about what happened. “When I heard what she was going through, I was so pissed. Because I related to it — I related to that f****** feeling of people just wanting to rip down the powerful, beautiful woman who [speaks her mind].”

Anniston added, “Stuff like that’s so sh****. I don’t like injustice. We’re living in a time where, whether it’s the internet or tabloids, being sh**** has become a sport. We’re just grown-up bullies. We literally could not need to have our hearts more open than in these times.”

Aniston said that it was in her 30s that she realized some important things about herself. “You can undo a lot of things. If you’re not happy, you can become happy. Happiness is a choice. That’s the thing I really feel. Like with friends who refuse to get happy, who refuse to rise above the discomfort of where they’re at.”

As for finding true love, Aniston had some advice about that as well. “You actually deserve to have a family. And once you meet yourself, and truly love yourself, then you attract that.”