Most people remember Mackenzie Rosman as the adorable youngest child in the family on 7th Heaven. But a lot has changed in 16 years, and the actress will be appearing in the newest Maxim magazine. 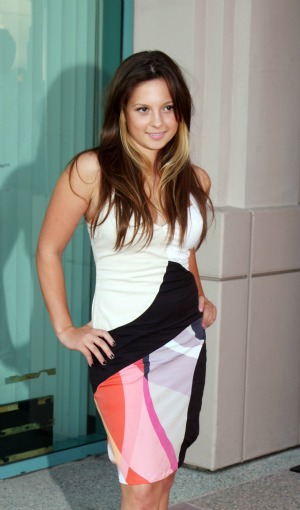 An actress who got her start on 7th Heaven is making the leap into Maxim, but it’s not the actress you might expect. Mackenzie Rosman, who spent 11 seasons on the show as adorable little girl Ruthie, is now 23 and is appearing in the magazine’s September issue.

Rosman landed the role as a minister’s daughter on 7th Heaven when she was only 7 years old, and spent the rest of her childhood years with her TV family.

Beverley Mitchell is in 7th heaven over baby news >>

She grew up quickly after the show ended, and two less-than-innocent photos of her leaked online. According to the Huffington Post, one had her in lingerie and the other showed her kissing another woman.

Back in March, Rosman tweeted about the Maxim cover, saying, “I caved… Just wrapped a #Maxim photoshoot.”

The actress follows in the footsteps of her TV big sister Jessica Biel, who stripped down for Gear back in 2000. Rosman remembers when that issue came out.

“It was a big deal. The magazine was banned on set, I think by orders of [executive producer] Aaron Spelling,” Rosman tells Maxim. “I sneaked a peek at it, though. It was racy gossip amongst the women of 7th Heaven.”

The actress is not appearing in the magazine to attempt to break back into acting, but to promote a movie. Rosman stars in the Syfy movie Ghost Shark, and will be chatting about that and growing up as a child star.

Rosman has actually been in the biz ever since the end of 7th Heaven. She appeared on ABC Family’s Secret Life of the American Teenager for multiple episodes along with another ex TV sister, Beverley Mitchell, who is also all grown up now.

While many child stars end up hating the business, the 23-year-old only seems to have good memories of her past life. In the Maxim interview, she was asked if she has ever seen a 7th Heaven drinking game.

“No, but I would like to see one,” she answered. “You could drink whenever Ruthie rolls her eyes or when Lucy squeals.”

Other stars who have appeared in Maxim