Olivia Wilde is engaged to her beau, but when her previous marriage of eight years failed, the actress was heartbroken and guarded about falling in love again. 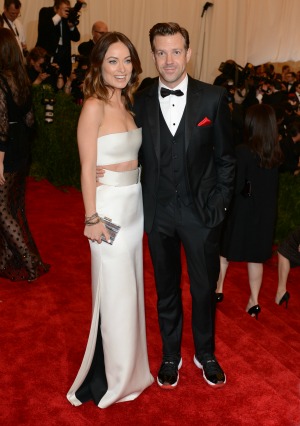 In February 2011, Olivia Wilde split from her husband of eight years, Tao Ruspoli — so it is not surprising that the actress was hurt and wary about falling in love again.

The Rush actress is now happily engaged to her beau, Jason Sudeikis. She has admitted, though, she is still concerned about being hurt and getting her heart broken again.

Wilde told Fashion Magazine in its September 2013 issue: ”It’s really hard to jump into a relationship after you feel you’ve been through a difficult time… I liken it to a burn victim jumping back into a Jacuzzi. It took a lot of coaxing.”

The actress does however claim that she is happier than ever with Sudeikis and believes she owes him credit for helping her become a better actress.

Speaking about her fiancé, she said, ”His skill level is so high. I really have learned a lot from him, especially when it comes to being bold and taking risks as an actor within a role.”

“Comedians are so great about trying things, like doing seven takes in seven different ways and really not being afraid to stumble.”

Wilde was always very serious about their relationship and making sure that it worked. She put her $2.5 million Los Angeles home on the market so she could move to New York City to be with Sudeikis.

A source close to the couple revealed to People magazine that, ”Olivia is so over commuting back and forth between LA and New York. At first she was worried that if she left the West Coast the acting offers would dry up. But these days she is more focused on her relationship than her career. She’s all about what’s best for them as a couple and that means living in NYC.”