Miranda Kerr is obsessed with being well-groomed, and the supermodel has hinted that her husband Orlando Bloom has a secret fetish. 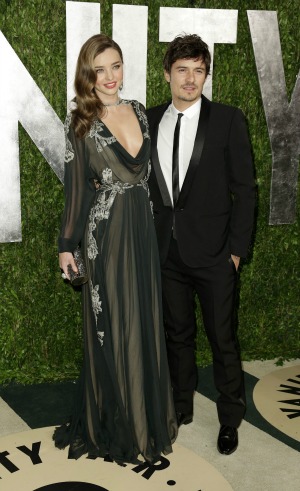 Miranda Kerr makes a living out of being beautiful and well groomed, so it is not surprising that she has admitted to being obsessed with keeping her nails well groomed.

The former Victoria’s Secret model said in an interview with beauty website Into the Gloss, that she is “a freak” when it comes to grooming, nail and foot care.

She told Into the Gloss, “I always keep my handbag packed with a few essentials. Like, I believe in dental hygiene, even on the go, so GUM toothpicks are a must. And I always keep Similasan Dry Eye Relief on me.”

“My eyes have been burned by flash bulbs twice at photo shoots — like blisters on my eyes — so I try to keep them lubricated now. I’ve also got tweezers and scissors for my nails in my bag.”

“I’m really a freak about my nails,” Kerr added.

The supermodel has been married to Bloom since July 2010 and the couple have a 2-year-old son, Flynn.

Kerr claims her husband has a bit of a fetish about her feet, so she makes sure her toes and soles are always in immaculate condition.

“Orlando and I share a nail thing; he has a bit of a foot fetish. I like OPI’s Koala Bear-y on my nails. It’s not organic, but sometimes I just do it,” she said.

Everything is not simple for Kerr and Bloom, though, as last month a 57-year-old man was arrested by police after he was accused of threatening to kill Kerr because he believed she was his “soul mate.”