In this episode of Switched at Birth, called “As the Shadows Deepen,” Jace and Daphne take their mini crime spree up a notch, Bay gets bad news from Ty and Toby has to deliver even worse news to Nikki. 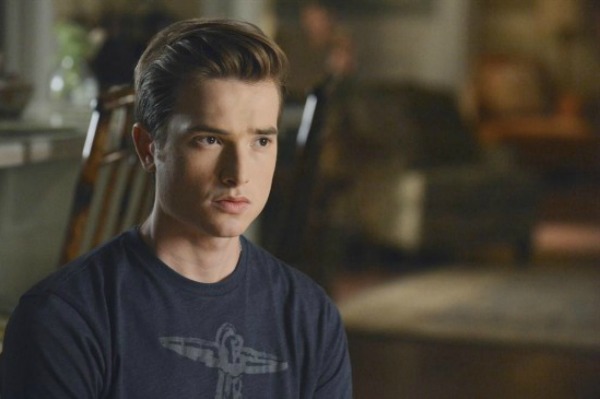 Jace (Matt Kane) and Daphne (Katie Leclerc) tried their hand at a little bit of blackmail in last week’s episode and to celebrate, they decided to nearly get arrested for parking their car and making out on a public street. Daphne thought it was all fun and games, that was until her ex-boyfriend Jeff showed up and made things more complicated. The interesting thing was that it wasn’t Jeff’s appearance that made her life more difficult, but the fact that Jace chose to run off and tell Jeff’s fiancée about Daphne and Jeff’s relationship. Add to that the fact that he had no problem stealing a guy’s credit card and finally she started to see him for what he really was. I did find it a little annoying that Daphne had no problem taking the cash from the guy, but at least something made it through the haze of Jace-love to show her that not all was right with him. Do I want them to break up? No, I really like Jace. But I do hope that maybe she can teach him right from wrong.

Switched at Birth Season 2 Episode 16 recap: This is the new reality >>

Bay and Ty take up arms together

Bay (Vanessa Marano) and Ty’s (Blair Redford) relationship hit a little snag in this episode when she had to get back in touch with Emmett in order to arrange the screening for Deaf Day at Maui. Ty got so angry with her after he saw them watching Dawn of the Deaf together (their kissing scene, no less) that I thought they were over for a minute there. As it turned out, the Emmett (Sean Berdy) thing was only a minor hurdle and the real trouble came when Bay discovered Ty was getting redeployed. I was so happy to see him go back to her in the end and promise to return. I truly hope that she waits for him this time.

After Nikki (Cassi Thomson) dropped the bomb that her father’s murderer had been found, Toby (Lucas Grabeel) decided that the only way she could get over her anger was to go and see the guy. That plan backfired when Toby discovered that Nikki’s dad was actually a drug dealer. Trying to do the right thing, he told her the truth and she of course got even more angry — at Toby this time — and stormed off. It’s a good thing that Kathryn got John’s dad to agree to make a call to get Toby into college, because the way things are going, there may be no wedding.

I can’t say how much I loved Travis (Ryan Lane) and Mary Beth (B.K. Cannon) in this episode. He’s had so many rough times and when he told her (with his voice!) that he needed a win, I just wanted to jump through my TV and give him a hug. I love both of those characters and I am just tickled pink to see how they get on in a relationship together.

Daphne and Jace finding a fun way to celebrate the death of abstinence-only education.

“It’s the accent. It freaks you people out.”

“He looks like his dad brought him to a Star Trek convention.”

Poor Travis trying to talk up the ladies and striking out.

Jace totally showing up Jeff by proving that he had learned to sign.

Emmett and Bay watching the end of Dawn of the Deaf together.

Kathryn telling John’s dad that she wished both of them would let go of their anger.

“I really wish I knew it was Helen Keller Day.”
“Oh, you’re in luck. Next Wednesday is Ignorant Bigot Day.”

Discovering the awesomeness that is deaf karaoke.

“I always come back.”

Ty telling Bay that he loved her.

“You can never see Deafenstein too many times.”
“Oh, I beg to differ.”

What do you think will happen between Jace and Daphne? Were you happy when Travis asked Mary Beth out?