SheKnows had a chance to talk with singer-songwriter Mikey Wax and ask him what it’s like to hear his own music on TV, musical comparisons, and how we can get him to come and play at our house. 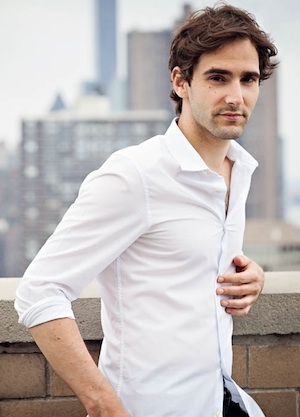 New York native Mikey Wax may not be a household name yet, but his music sure is. Fans of So You Think You Can Dance have heard his music. So have viewers of Dance Moms, Ghost Whisperer, The Real World, Teen Mom and the 2012 Olympic Games.

And tonight, Wax’s song “In Case I Go Again” will be featured on the ABC Family hit series Pretty Little Liars. SheKnows had a chance to talk to Wax and get to know him and his music a bit better.

SheKnows: For people who are not familiar with your music, how would you describe your sound?

Mikey Wax: It definitely falls under pop/rock, but I like to think my music has a lot of soul and “cinematic-ness.” I just invented a new word. I often start humming some kind of melody, and then I spend a lot of time writing lyrics I can connect to, and hopefully others do, too.

SK: Others have compared your music to Coldplay and John Mayer. Who do you compare yourself to?

MW: I try not to “compare” so much as be inspired by other artists. Coldplay and John Mayer write amazing melodic songs, and I’ve always been a melody-first kind of writer. I grew up learning every Beatles and Billy Joel song on piano, which probably soaked in my musical veins and got me creating my own songs.

SK: What are three tracks of yours that you would suggest to people who want to learn about you?

MW: “In Case I Go Again” is the song that is being featured on Pretty Little Liars, and is also the song that got my career started after it was featured on the home page of YouTube. I’d say next is my song “Counting On You,” which received a lot of radio airplay across the country, and was also used on So You Think You Can Dance as the weekly elimination montage song last season. That was really cool and a lot of people found out about my music from that. I’d say third is my song “Marion.” This song isn’t a big “pop” song, but I think it shows what I’m truly about as an artist.

SK: Talk about the track “In Case I Go Again.” What was your inspiration for it?

MW: I knew it was a special song right when I finished it, which was pretty much in one night — very rare. I think it’s a real coming of age song — trying to figure out the future and leaving childhood behind. I wrote it on one of my first nights back home after graduating college, in the dead silence of sitting in my old room. It was a strange yet romantic feeling. There was also my girlfriend at the time of five years involved, but we won’t get into that.

SK: What is it like to watch a movie or a show like Pretty Little Liars and hear your song?

MW: It’s pretty surreal. I’m sure the song creates different emotions for every different viewer, but what I often think about when I hear it on TV is when I first wrote it, finished it, recorded it in the studio, and all the work that went into it having it heard by millions of listeners.

SK: You are currently recording your third studio album in as many years. How will this upcoming album be different from your previous work?

MW: This new album is definitely much more upbeat and a bit edgier than anything I’ve done before. It’s gonna be sexy, that’s all I can say! I have a working title, but I won’t know for sure ’til I listen front to back. There is no set release date at the moment, but I will probably release a single or few songs from the album in the upcoming months.

SK: Be honest. Do you buy your own music from iTunes?

MW: Haha. Of course! When it goes live on iTunes I buy one copy, mainly just to make sure the download works, but also to celebrate!

SK: Who have been the biggest influences in your career?

MW: My family, friends and fans are no doubt my life. Morning, rain and the stars are also up there for influences. Musically, I have influences ranging from the 1940s all the way to 2013 — Louis Armstrong, Sinatra, and The Beatles inspire me just as much as Ed Sheeran or Gavin DeGraw.

SK: What songs are on your personal summer playlist right now?

MW: My playlist has been pretty eclectic this summer. A lot of Top 40 songs like [Daft Punk’s] “Get Lucky,” [Zedd’s] “Clarity” and “Blurred Lines” [by Robin Thicke] mixed with some indie music, ’90s jams, and the soundtrack from [the movie] Rocky.

SK: How do you describe your personal style?

MW: I describe my personal style in a V-neck T-shirt, button downs, Levi jeans and occasionally a backwards Mets hat. Unless you meant musically, which I’ll let readers decide for themselves.

MW: I’m actually hitting the road this week to do 15 in a row! When people started to find out about my music through YouTube, I didn’t have a booking agent at the time. I started doing house concerts since it was an easy way to play for my fans and not have to wait for music venues to get back to me. I was so appreciative of the support I received from the house concerts that I still try to do them as often as possible for my fans. You can sign up for a house concert at mikeywax.com/houseconcerts.

Gavin DeGraw doesn’t want to be anything other than himself >>

Mikey Wax’s song “In Case I Go Again” will be featured on tonight’s episode of ABC Family’s Pretty Little Liars at 8/7c. Check out the video below and let us know what you think in the comments.