Putting people in crisis situations really brings out their true colors. Unfortunately, on Under the Dome, those colors really aren’t all that pretty. Things turn violent when water turns scarce. 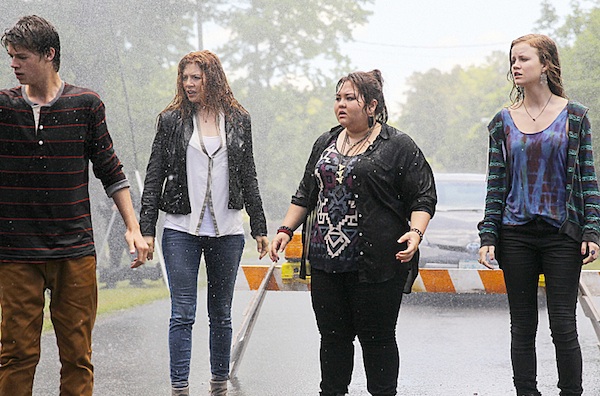 Under the Dome is bringing it this episode — probably my favorite of the series so far. It’s getting good!

The bomb didn’t even put a dent in the dome, and people are starting to panic. Things take a turn for the worse when Alice walks in front of a truck, causing it to swerve into the water tower. A pipe breaks, ruining the town’s water supply. As if that isn’t bad enough, the lake has been contaminated with methane and is undrinkable. Suddenly, water is a scarce commodity and violence breaks out throughout the town.

Turns out, Alice walked in front of the truck because she’s hallucinating. Her insulin is out, and the hospital doesn’t have any left either. Norrie makes a plan to find out who else in the town is diabetic and steal their supply.

Meanwhile, Julia (Rachelle Lefevre) discovers the town frequency is jammed. Dodee says it jammed right before the bomb hit the dome, and there is a good chance the dome is causing it as a way of protecting itself. Dodee wants to find the source, hoping it might be where the dome is radiating from. If that’s the case, they can shut the dome down. Julia agrees to help her.

Almost free… then not so free

Junior is still holding Angie hostage in her own home. She hits him over the head with a snow globe and runs to Rose’s restaurant. She tells Rose what happened to her. Angie doesn’t think anyone will believe her word against Big Jim’s. Rose believes her and says she’ll stay on Angie’s side.

Two guys break into Rose’s store to rob her. One of the guys hits Rose repeatedly with a baseball bat. Angie tries to fight them, but one throws her to the ground and she passes out.

After the guys take the meat, they go after Angie for something more.

Barbie (Mike Vogel) sees a guy guarding Rose’s door and knows something isn’t right. He goes inside and grabs Angie before the guy can hurt her. Rose is dead. 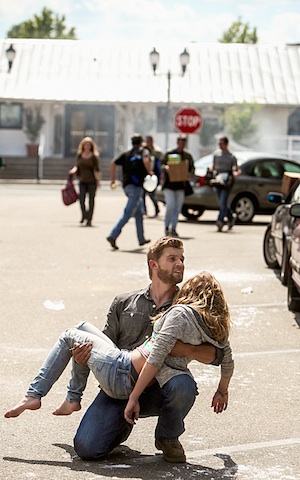 Joe and Norrie have an attraction

Norrie steals insulin from a house, but discovers a little boy inside who is the diabetic. Norrie can’t bring herself to steal from him. She takes one vial but leaves the rest for the little boy.

Dodee and Julia track down the signal to Norrie and Joe. They think the signal is coming from the kids. Joe admits that when he and Norrie touch, they have seizures.

Norrie and Joe touch the dome together and the radio starts working again. Norrie doesn’t have time to figure out why though. She has to get the insulin to her mother.

Back in the town, the violence is getting worse as water grows scarce. Just when Linda thinks she has to resort to violence, it begins raining inside the dome. Barbie asks Big Jim to take Angie to the hospital and tells him Rose is dead. Linda identifies the killers as the Dundee brothers based off Barbie’s description.

After Julia witnesses Norrie and Joe’s connection to the dome, Julia concludes the dome is using the kids somehow. Julia reasons that the dome protected the people from the missile and gave them rain just when they needed it. It’s like the dome is helping people. Dodee doesn’t buy it, but agrees not to tell anyone about the kids until they know what’s going on with the dome.

Norrie saves her mom. This time. But they have no idea where they’re going to get the next dose.

That night, Julia finds Barbie on the road. She pulls over and they comfort each other. Let the kissing in the rain begin.

Big Jim takes Angie back to his house instead of the clinic. Big Jim tells her Rose is dead, and he wants to make an arrangement with Angie. He knows there is something messed up with Junior. Big Jim offers Angie his word that Junior will never touch her again. He also offers her propane, water and anything else she may need if she agrees to put the kidnapping behind her. Angie adds Joe into the equation and says she’ll think about it. Junior shows up at the house and wants to know what’s going on.