Love is in the air for the star of MTV’s Teen Wolf. He may be young, but Tyler Posey’s getting hitched. The actor recently proposed to his girlfriend and she said yes! 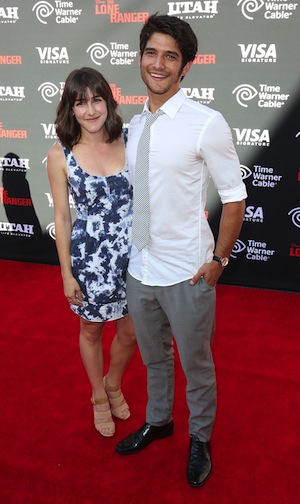 Congratulations are in order. MTV star Tyler Posey is engaged. The 21-year-old actor popped the question to his longtime girlfriend, Seana Gorlick. Don’t let their age fool you, the duo have been dating since they were kids.

According to Us Weekly, Posey confirmed his engagement on Saturday (July 27), while attending the Variety Power of Youth event. It was there that he explained, “I’ve known her since I was 11 and been in love with her since I was 12. I’m so inspired by her. I think she’s the coolest, most raddest person ever. She’s so nice and so cute.”

Aww, it looks like this puppy love became the real deal. So how did Posey propose to his future wife? It all started with a 12-day trip to Hawaii. The island paradise served as the perfect backdrop for his big announcement. The actor revealed that amidst a conversation and dinner he decided to pull out the ring and go for it.

Adam Levine is engaged! 5 of his former flames remembered >>

“I didn’t know if I was going to do it — I didn’t have a plan or anything,” he said. “I was so damn nervous,” he recalled. “I just asked her and it was the coolest thing in the world. Her reaction was the sweetest — I can’t even explain it!”

He might be off the market but you can still watch Posey in all his glory on Teen Wolf. The series airs Mondays at 10/9c on MTV.