Real Housewives of New Jersey reality show stars Teresa and Joe Giudice are in hot water after the federal government charged them with 39 counts of fraud. This has been an ongoing saga for the TV personalities. 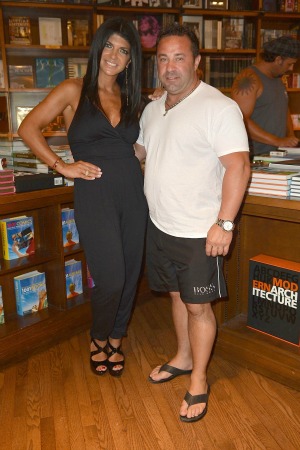 It was not a good start to the week for Real Housewives of New Jersey star Teresa Giudice who, along with her husband Joe, was charged with 39 counts of fraud by the federal government. The list of charges includes bank fraud and tax evasion between the years of 2001–2008.

According to TMZ, the couple attempted to obtain mortgages and loans from several banks while inflating their income level on the applications. Other counts involve withholding information about their net worth during their Chapter 7 bankruptcy case in 2009 as well as tax evasion on Joe’s part. He failed to file income tax returns from 2004–2008 when he reportedly earned $1 million.

Real Housewives of New Jersey: Why tourism is down in NJ >>

The federal attorney in the case, Paul J. Fishman, stated, “The indictment returned today alleges the Giudices lied to the bankruptcy court, to the IRS and to a number of banks. Everyone has an obligation to tell the truth when dealing with the courts, paying their taxes and applying for loans or mortgages. That’s reality.”

These serious charges could total up to over 50 years in prison for the reality show couple. The conspiracy to commit mail and wire fraud can add up to 20 years while the bank fraud charges can carry up to 30 years for the Giudices.

The Bravo network personalities have not been arrested, but they will appear in a New Jersey court on Tuesday morning.

Teresa’s attorney told the New Jersey Star-Ledger, “Teresa will plead ‘not guilty.’ The judicial process that begins today… is a search for the truth. As it moves forward, we look forward to vindicating her.”

The 41-year-old mother of four also released a statement to the paper.

She said, “Today is a most difficult day for our family. I support Joe and, as a wonderful husband and father, I know he wants only the best for our lovely daughters and me. I am committed to my family and intend to maintain our lives in the best way possible, which includes continuing my career. As a result, I am hopeful that we will resolve this matter with the Government as quickly as possible.”

This ongoing saga is not breaking news for fans of the reality TV franchise. Viewers are well aware of the couple’s financial and legal problems because it has been addressed over five seasons on the show.

One big concern is the couple’s children. Joe and Teresa are parents to four young daughters: Gia, 12, Gabriella, 9, Milania, 8, and Audriana, 4. Any jail time for the pair would be quite the upheaval for the girls.

As of press time, Bravo TV had no comment about the charges.