The shuffle of hosts continues over at The View. The latest rumored name to replace exiting host Joy Behar is The Today Show‘s Hoda Kotb. 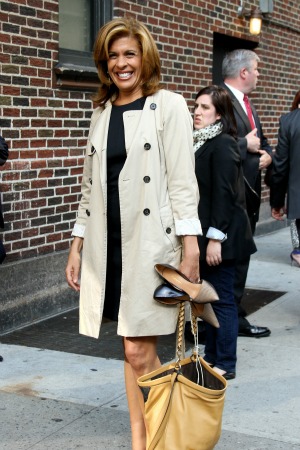 Water-cooler chatter about The View hasn’t been this hot for years, but the revolving hosts have made talk about the show relevant again. With Elisabeth Hasselbeck already gone and Jenny McCarthy replacing her in the fall, who will take Joy Behar’s place?

Most of the rumors have pointed toward actress Brooke Shields, who has filled in numerous times on the panel. However, a new name has surfaced that would set off some serious morning talk-show wars.

The Today Show‘s Hoda Kotb is the latest TV personality to be added to the list. According to the New York Post, a source told them that ABC is “very interested” in the newswoman and has already approached her management team.

Another insider also shared with the newspaper, “Hoda addresses several of their needs. She has news experience, which is something The View has not had since Meredith Vieira left. She also adds some diversity to the panel.”

Kotb, who currently hosts the boozy fourth hour of the Today Show with Kathie Lee Gifford, was also in the running to replace Ann Curry who was ousted as co-anchor last summer. The 48-year-old is held in high regard for her ability to bridge her journalistic background with her relatable personality and interest in pop culture.

On Monday, ABC caught wind of the rumor and tried to nip the gossip in the bud.

Whether Kotb would actually consider the offer is another story. She has a pretty cushy job over at the Today Show with Gifford and she occasionally fills in during the earlier hours when some of the anchors are on assignment or vacation.

The bottom line is that The View is really trying to shake up their tired format with hosts that will breathe some new life into the aging daytime talk show.