Fergie and her husband Josh Duhamel celebrated the pending arrival of their baby boy in style this weekend at the SLS Hotel in Los Angeles. 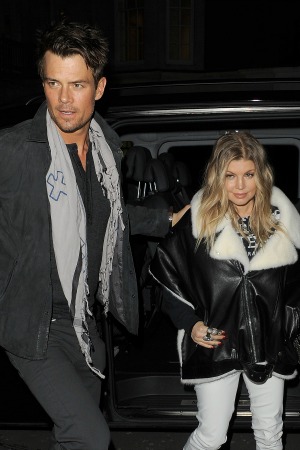 Everything was teal, black and white on Sunday as Fergie and husband Josh Duhamel went all out for their baby shower at the SLS Hotel in Los Angeles. The couple recently announced that they’re expecting a little boy.

People magazine reports that guests at the party drank through black-and-white striped or polka dot straws adorned with little flags with musical notes. The cake also kept up with the color theme: designed by Dylan Lauren, it was four tiers with one layer of blocks spelling out “Baby,” while a teddy bear with little Xs for eyes sat at the top.

While the adults (except Fergie, of course) sipped Fergie’s own Ferguson Crest wine and Patron Ferg-aritas, kids at the event enjoyed having teal and clear balloon animals made for them, as well as bags full of blue and white candies.

As the festivities were getting started, Fergie reportedly got on the mic to announce, “Woo! It’s my baby boy’s first party!”

Dad-to-be Duhamel was there to celebrate with his wife, bucking the old-fashioned convention of making a baby shower a ladies-only affair. Duhamel recently revealed that he had even put on some sympathy baby weight during his wife’s pregnancy. Talk about a team player.

Duhamel revealed to People recently that he was definitely planning on getting Fergie a “push present.”

“Yes, I will be getting her a push present. I just don’t know quite what yet,” he told the magazine.

“You got Christmas, you got birthdays, you got Valentine’s, you got Mother’s Day, you got every other thing in between… I don’t know who came up with this push present idea, but I think it’s probably a female,” he added.

Fergie recently gave Duhamel a present of her own when she legally changed her name to Fergie Duhamel.