There has been speculation after speculation about why Jennifer Aniston and Justin Theroux are not yet married. The actress opens up and explains the wedding isn’t what makes their relationship what it is. 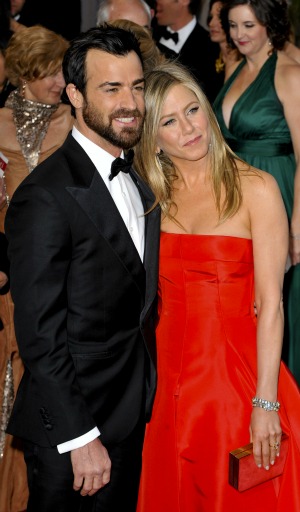 Jennifer Aniston and Justin Theroux have been engaged for almost a year, and in that time have seen numerous rumors about the state of their relationship. The actress wants to set the record straight and let everyone know the couple is in no rush to be married.

“We just want to do it when it’s perfect, and we’re not rushed, and no one is rushing from a job or rushing to a job,” Aniston told the Associated Press.

For the couple, the title of being married doesn’t mean as much to them as how they feel toward each other.

“You know, we already feel married,” she added.

Theroux and Aniston have been dating for two years, and were engaged on her birthday last year. They have weathered numerous rumors about the state of their relationship, which have ranged anywhere from a breakup to not wanting to conflict with her ex Brad Pitt’s wedding to Angelina Jolie.

Aniston said all those rumors are untrue, and their wedding planning so far has gone exactly as they have planned.

Adding to the delay, Aniston doesn’t exactly seem like the wedding-planning type. She told E! News back in April that everything that goes into a wedding “might make me crazy.”

Though the couple is in no hurry to get married, it doesn’t mean their relationship isn’t as great as ever. However, Aniston is also still as busy as ever, which may postpone her wedding even longer. Her newest film, We’re the Millers, co-starring Jason Sudeikis (another newly-engaged actor), opens in theaters Aug. 7.