Christina Ricci is looking forward to her forthcoming nuptials, and she believes that she is taken more seriously as an engaged woman. 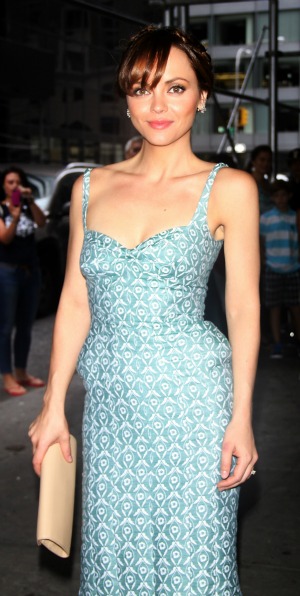 Christina Ricci accepted the proposal of her beau, camera technician James Heerdegen, in late 2012, and she claims that ever since she got betrothed there has been a noticeable change in other people’s perception of her.

The 33-year-old actress was recently spotted at the New York City screening of The Smurfs 2 on Sunday.

When Ricci was asked by People magazine what she’s enjoying the most about being engaged, she responded, ”Getting to say ‘fiancé’ instead of ‘boyfriend’. People take you so much more seriously once you start throwing around that word.”

Ricci can’t wait to walk down the aisle because she believes that being someone’s wife will give her more power and protection.

She joked to People, “I can’t wait for ‘husband’ because then I can really throw my weight around,”

“‘My husband’s going to come down here and talk to you!’ That’s a huge threat.”

Ricci seems to have a fun side onscreen — who voices Vexy, the animated troublemaker in The Smurfs sequel — and offscreen, with her lighthearted humor about marriage.

The star revealed that she is very excited about her big day and has been picking out items and planning the details.

Ricci has already chosen a dress, although she has yet to reveal who has designed it. The actress has only said it has been ”designed by a friend” of hers.

Ricci was joined at The Smurfs 2 screening by her co-star Hank Azaria — who plays Gargamel, but more importantly we wish Ricci all the best for her forthcoming nuptials.