In this episode of The Killing, called “Six Minutes,” Ray’s final moments on earth tick down as Linden continues to do whatever she can to prove his innocence, while Holder deals with last week’s loss the only way he knows how. 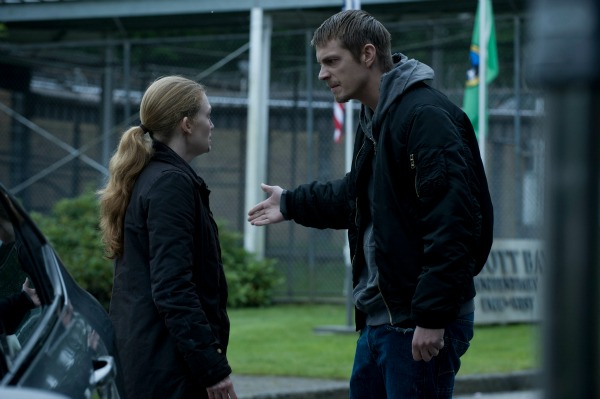 It is not easy typing through tears, but I’m going to do my best to keep moving forward after yet another heart-wrenching episode of this series. It figures that I was out of town and unable to recap last week’s episode. I thought that Bullet’s death would be the last thing that would bring me to tears on this show, but I was completely wrong. I pretty much cried my way through all 40-something minutes of this one, especially in the final minutes.

The Killing Season 3, Episode 10 recap: Will the killer get a new victim? >>

The episode began with a chilling scene as Ray (Peter Sarsgaard) was shown on the hanging platform with a bag on his head. After asking if he had any last words, they flipped the switches and sent him to swing but it turned out to be just a drill. Even with just a dummy, it was a terrible thing to watch and I hoped that they showed that so that there would be no need to see the actual deed if or when it happened. Once again, I was completely wrong.

Buoyed by the evidence she found in Mills’ possessions, Linden (Mireille Enos) went back to the prison to talk to Ray. She didn’t tell him what she had, but only asked him if he recognized one of the rings. When he was able to identify it, Linden immediately requested further investigation and a possible stay of execution. While they waited to hear back, Linden and Ray talked about their children in some of the quietest scenes the show has ever had. Knowing that Adrian was waiting outside to see his father, Linden kept trying to convince Ray to let his boy come back, but he kept right on refusing.

While Ray and Linden were talking, the guards suddenly came in and took him away. She screamed and threatened to get him back, but ended up having to wait. Back in the waiting room, Holder (Joel Kinnaman) looked very much worse for wear and freely admitted that he’d been drinking pretty much nonstop since he found Bullet. But even though he was hurting, I found it amazing how Holder kept helping everyone else. When Linden wanted to give up on Ray after hearing that he had actually been in the apartment the night his wife was killed, Holder wouldn’t let her. Holder even got himself together enough to talk to Adrian. Sure, Adrian spotted that Holder was drunk as a skunk, but he still seemed to help the kid.

In the end, the judge decided that the evidence wasn’t enough for a stay of execution and Holder went back to deliver the news. She also got Ray to finally reveal why he was in the apartment that night and it turned out he went back to get his son. Ray admitted all of the other crimes that he did, seemingly trying to make peace with the fact that he was going to be executed for the one crime he didn’t commit.

The Killing Season 3, Episode 7 recap: Linden gets in deeper >>

The final minutes of this episode were so raw, so brutal, that it’s kind of hard to relive them again — even to write them down. Ray finally agreed to let Adrian see him, but thanks to all the delays, the guards said that visiting time was up and dragged Ray away kicking and screaming. Linden tearfully reminded Ray that Adrian could hear him and told him to remember the trees outside his window. Later, when he was being walked toward the execution room, Ray stumbled and lost his step, but when he saw Linden standing with his son outside the window, he found a little strength.

The scene I hoped we wouldn’t have to see came when they walked Ray onto the platform. After he gave his final words about Salisbury steak, the bag was put over his head. I couldn’t help but notice how Becker’s hands lingered on Ray’s shoulders as if to provide a touch of encouragement and perhaps a little bit of an apology. Most of the time, a show would have probably cut away from a scene like that or maybe had it play out with only music. The silence, broken only by Ray’s sobs, was almost too much to bear and then — just when I thought it couldn’t possibly get any worse — it did. Ray began to choke and I had to wonder at how the writers could torture me like that. Thankfully, it didn’t take six minutes for Ray to die, but it sure felt like it.

What did you think of this episode? Were you surprised to see Ray executed or were you hoping that Linden would somehow save him in the end?