Miley Cyrus may be growing up fast, but her rebellion is benefitting people around the world. She decided to pose naked (NSFW alert!) for a campaign to fight cancer. 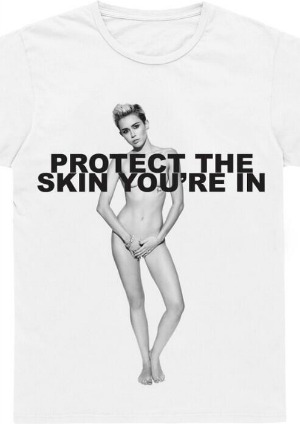 Miley Cyrus has never been shy about being herself or promoting what she believes in. Her newest venture is no different.

The actress and singer is helping Marc Jacobs and Robert Duffy with their new collection of T-shirts. Cyrus, who is becoming a fashion icon in her own right, appears on the shirts, standing in the nude along with a slogan that reads: “Protect the Skin You’re In.”

Cyrus recently said she is successful because she believes in helping others.

Although the 20-year-old is completely naked in the campaign, she does have the help of her hands, and the words, to protect her more important parts.

The T-shirts will benefit the New York University Cancer Institute and Medical Center, according to the U.K. Daily Mail. Cyrus tweeted the exciting news Friday.

Other celebrities who have lent their names, faces and bodies to the campaign include Victoria Beckham, Naomi Campbell, Dita Von Teese and Rufus Wainwright.

“[Cyrus] has been a friend of mine for a while and I think she’s beautiful,” Duffy told Women’s Wear Daily. “She is a lot of fun to be with. She is talented in many mediums from music to film. She really has a very good, solid head on her shoulders. I adore her.”

The T-shirts are now available at nine Marc Jacobs locations across the country.

Miley Cyrus’ Hannah Montana hair: “None of it was ever real” >>

Cyrus has a new album out soon, and she has been staying as busy as she always has. MTV announced Friday it will be producing a documentary about Cyrus’ life. The one-hour show will follow the singer as she works on her new album.

In the past, MTV has done similar documentaries on artists like Nicki Minaj, Lady Gaga, Drake and Britney Spears.

Because Cyrus considers her music her life, there is a chance you may see appearances by fiancé Liam Hemsworth and members of her family.