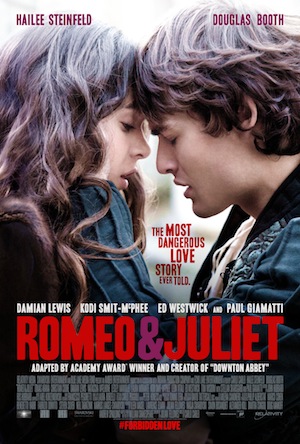 Hollywood is dishing out another tale of forbidden love. This time, it’s the one that started it all — Romeo & Juliet. This fall, Relativity Media is releasing an adaptation of William Shakespeare’s classic play. Oscar nominee Hailee Steinfeld and Douglas Booth appear as the star-crossed teens destined for an unhappy ending.

Friday, the studio released a poster and trailer for the drama. Judging from the footage, the film sticks with the tone of the original. The Old English language is in full effect and delivered effortlessly by the cast. The last time we saw such a bold retelling was Baz Luhrmann‘s 1996 effort, which famously featured Leonardo DiCaprio and Claire Danes.

Romeo & Juliet looks beautiful and has its fair share of trained actors. The film co-stars Stellan Skarsgård, Damian Lewis, Paul Giamatti and Ed Westwick. We must admit, Westwick as Tybalt is keen casting. He was born to play the role. His rage, his aggression and even his hair pull you in. Plus, we see a little of Gossip Girl‘s Chuck Bass rearing his head.

Check out the first trailer for Romeo & Juliet below:

The film is directed by Carlo Carlei and based on a screenplay written by Julian Fellowes (Downton Abbey). We’re sure every young actor tried to get a part in this film. What aspiring thespian doesn’t dream of playing Romeo or Juliet at some point?

What do you think of the first trailer for Romeo & Juliet?