Garth Brooks joins the list of celebrity families that welcomed new bundles of joy this week. The country singer is a grandfather! 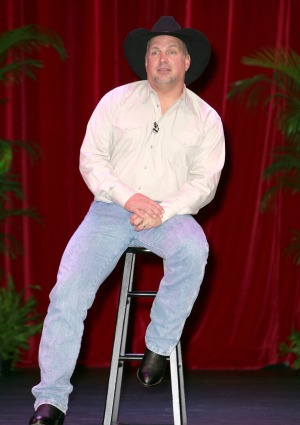 One of country music’s biggest superstars, Garth Brooks, is officially a grandpa. His daughter, August Brooks, gave birth to a baby girl earlier this week.

His first grandchild’s name is Karalynn, but Brooks wasn’t the one to reveal the news. According to Yahoo! Music, some of his fans sleuthed around social media and made the discovery. That’s when the Grammy winner issued a statement:

“Our family would first like to thank everyone for their warm wishes and sweet celebration of Baby K’s arrival. Our children’s lives have always been extremely private and they have been endlessly encouraged to be their own people. We have always wanted them to be individuals and NOT be known as ‘someone’s daughters.'”

Brooks then pleaded for privacy for the new family.

The 51-year-old asked, “I have been amazed and grateful how the press has always respected this. I now ask that respect to please continue as this young family begins the greatest days of their lives.”

While his daughter has been with the baby’s father for some time, they are not married. In fact, August is only 19 years old, so that may have played into the musician’s request for the media to back off.

Family has always been important to the country singer, who stepped off the road in 2000 to spend more time with his family. As the father of three daughters from his first marriage, he wanted to wait until his youngest child, Allie, had graduated from high school before touring again.

With Allie set to graduate in May 2014, fans can look forward to Brooks hitting the road. Perhaps he will create a show with his second wife, fellow country singer Trisha Yearwood, to whom he has been married since 2005.

Either way, it’s a celebratory time for Brooks and his family. Congratulations, granddad… we won’t tell a soul!