It’s the song of the summer, and with its risqué lyrics and even racier video, Robin Thicke’s “Blurred Lines” was ripe for parody. SheKnows has scoured the internet to bring you some of the best parodies we could find. 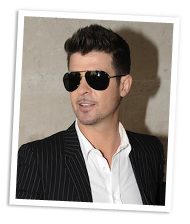 We know you want it

It’s the song of the summer, and with its risqué lyrics and even racier video, Robin Thicke’s “Blurred Lines” was ripe for parody. SheKnows has scoured the internet to bring you some of the best parodies we could find.

Forget “Blurred Lines.” There is a very clear line between misogyny and feminism and you, Sir Thicke have stepped over it — so say these law students from Aukland, New Zealand. The ladies are crass and VERY NSFW, but ultimately their, admittedly late-to-the-game feminist critique of the original has gotten people talking.

Now, you may not know this, but there are actually two videos for Robin Thicke‘s “Blurred Lines” — one where the female models are clothed and one where the models are topless in flesh-colored G-strings. Well, the Seattle-based “boylesque” trio of The Luminous Pariah, Paris Original and Trojan Original (we’re not sure if they are related) got together with vocalists Caela Bailey, Sydni Deveraux and Dalisha Phillips for this NSFW spin on the topless version of the Robin Thicke chart topper.

Said the boys, “It’s our opinion that most attempts to show female objectification in the media by swapping the genders serve more to ridicule the male body than to highlight the extent to which women get objectified and do everyone a disservice. We made this video specifically to show a spectrum of sexuality as well as present both women and men in a positive light; one where objectifying men is more than alright [sic] and where women can be strong and sexy without negative repercussions.”

Preach on, brothers. And by the way, we would kill for legs like yours.

Tied with ModCarousel for our favorite parody is this video from The Pet Collective. Featuring many furry friends, this parody takes takes “Blurred Lines” to a very cute and slobbery level. And by the way, Robin, “pug me” rhymes with “hug me.”

While not a parody, this rendition of “Blurred Lines” by Jimmy Fallon, Robin Thicke and The Roots is certainly the most joyous of the bunch. There is just something about seeing grown men playing kazoos, a toy xylophone and a melodica (the keyboard flute thing) that makes you want to hug someone.

When Robin and Pharrell went to Jimmy Kimmel Live, you just knew something funny was going to happen. Jimmy explained that he and his sidekick/security guard, Guillermo, were originally supposed to be in the video, but it just didn’t work out. While Jimmy is certainly funny, there is nothing like Guillermo and his Pharrell-inspired gold lamé tracksuit. #Guillermo forever!

We love this version of “Blurred Lines” by Bill Clinton feat. Barack Obama. Whenever we see one of these videos from the YouTube channel BarackDubs, we can just imagine someone sitting in a dark room watching every single speech Bill Clinton ever made and writing down all of the words. It may be a thankless job, but it makes for a hilarious video.

Did you know that Robin’s dad, Alan Thicke, wrote the Growing Pains theme song? Neither did we. (By the way, he wrote the Wheel of Fortune theme song, too.) Well, this video from The Hood Internet called “Blurring Pains” mashed up the beat of “Blurred Lines” with the Growing Pains theme song’s lyrics. Add in some photoshopped stills of Alan Thicke with the “Blurred Lines” girls, and you’ve got a viral video.

We’ve got a twofer for you. Both have the same idea with funny results.

All this #COSBY version does is match the song to the opening credits of The Cosby Show. It’s a simple idea with some great results.

The senior citizens at the Fair Lawn Senior Center add their take to “Blurred Lines.” It just goes to show that your sense of humor and dance abilities do not diminish as you get older. And by the way, I’m sure Ed was a lady-killer in his day.

Sketch comedy team MadMoni made this video about the sexiness that is a guy with tan lines. For sure, ladies aren’t the only ones who worry about their bodies at the beach.

You know you’ve really made it big, not when your song has been at the top of Billboard’s Hot 100 chart for seven weeks but when you get a remake of your video with puppets. Yes, that’s when you’ve hit the big-time.

Ooh la la: Check out our playlist that will get sparks flying in the bedroom >>

Australian radio show hosts Fifi and Jules produced this parody right when the video came out. As Fifi (played by Australian supermodel Sophie Monk) says in the video, “They should be wearing clothes. Three men should not be naked.” We don’t know about that. We say turnabout is fair play.

This parody certainly doesn’t have the production value that the original does, but with the 8-bit back track, an appearance by Warrio and lyrics like “OK, so I’m not close, trying to get all achievements,” “Game Time” is why we like the internet. You can get together with your friends in your front hall and make a viral video.

Clearly the nerdiest parody of the bunch, “Good Wall” is amazing (and no, I have no idea what any of it means). But if you have Pokémon fans in your house, they will definitely be able to see the genius in this song — especially the rap. I, however, am going to call my 10-year-old nephew over to explain this one to me.

How to nourish your child’s inner geek >>

I am always so embarrassed when I’m shopping and my 2½-year-old daughter starts singing “Blurred Lines” in the produce section. I must be the worst mom in the world, but I know I’m not the only one. So, Atlanta kiddo Matty B has developed his own version of the song (with the help of some adults, I’m sure) called “Kids World.” Look, it’s not a very good song, but it’s clean — and at least your toddler won’t be singing “I know you want it,” to the watermelon.

Not a parody, per se. The Ivy League–educated guys in Vampire Weekend covered “Blurred Lines.” It’s good and strange and awesome all at once.

Hipster trends for all ages >>

Which one is your favorite? Are there any of your favorites that we missed? Let us know in the comments below.