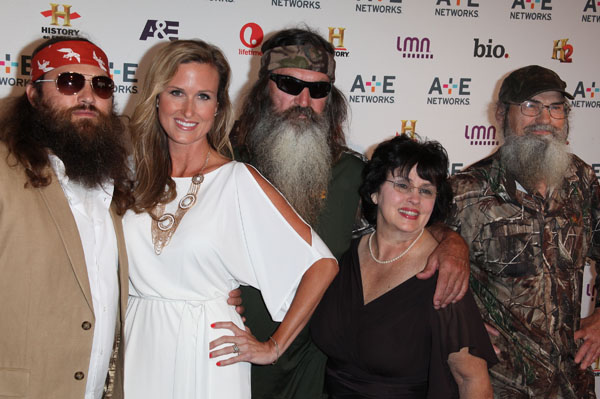 It’s hard to believe that a reality show based on family business would turn into such a huge success. Then again, the Robertsons don’t run most family businesses.

The clan behind A&E’s Duck Dynasty has turned camouflage and long beards into certifiable fashion statements — and, unlike most reality shows, it’s brought their family closer together.

“It’s probably the opposite of most reality shows. And nobody gets a big head because we’re doing it all together,” Willie Robertson tells Parade in a new interview.

Probably because the Louisiana-based family won’t change for television.

“They come up with ideas, but I get to be myself in those ideas,” Jase Robertson says of A&E producers, adding that he shuts down ideas he doesn’t like. “One day when we were gonna play golf, a wardrobe person brought me a pair of knickers,” he recalls. “I guess they thought that would be funny. But I don’t wear knickers. They said, ‘A&E wants you to.’ I was like, ‘I don’t care!'”

The Duck Commander warehouse — the location of most of the show’s filming and the hub of their multi-million-dollar duck-call business — is now a tourist attraction. They don’t get the appeal, though.

“I told Missy, my wife, the only person I’d stand in line for is God almighty: ‘You made the universe? All right, I’ll get in line!'” Jase adds.

But, nothing this good lasts forever: Patriarch Phil Robertson says he won’t be on the show forever.

“Not long,” Phil says of his remaining tenure on the show. “But I think it’ll go on without me.”