Avril Lavigne got a little help from a friend for a new project. Danica McKellar got all dressed up for a day and starred in Lavigne’s new video for “Rock N Roll”. 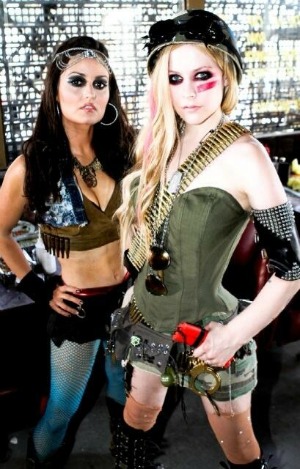 Winnie Cooper is officially a rock star. Danica McKellar, who played the TV-show girlfriend of Kevin Arnold (Fred Savage) on The Wonder Years, was given the rock-star treatment for Avril Lavigne’s new video “Rock N Roll.”

Lavigne posted a photo on Twitter of herself and McKellar all dressed up for the camera. The clothing was nothing new for Lavigne, but quite the rock and roll makeover for McKellar, the math whiz and mom (and new Mommaloguer for SheKnows).

McKellar is all dressed up in blue fishnets and heavy eye makeup, while Lavigne is wearing an army helmet and green bustier. According to MTV, the song has Lavigne calling herself “the motherfreaking princess,” but she looks anything but that in the new photo.

McKellar tweeted about the video shoot on Friday.

Lavigne shared the photo of her and McKellar, along with the caption, “My partner in crime @danicamckellar on the set today of my music video for #ROCKNROLL.”

There is no word on how Lavigne and McKellar know each other, but it sounds like they’ve quickly become friends.

Lavigne’s upcoming album is the same one where she met her husband Chad Kroeger (whom she married earlier this month) when he joined her to help write a song. She also worked with other musicians, including Marilyn Manson.

The video has not yet been released, but the single will be on iTunes starting Tuesday, July 30.

Danica McKellar is now 38 and working on being a mom, author and mentor to women pursuing careers in male-dominated fields. She currently has four books out, including Kiss My Math, Hot X: Algebra Exposed, and Girls Get Curves.