Miley Cyrus says credit for her success can be given to one very simple thing: Good karma. 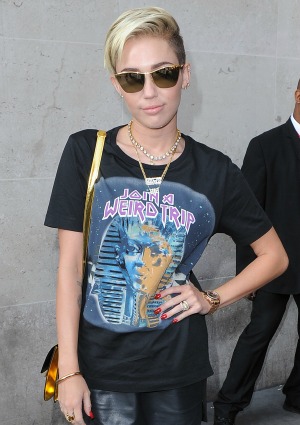 Work hard, play hard, don’t be a jerk: This is the Miley Cyrus recipe for success in life.

At just 20 years old the former Disney star has enjoyed over a decade of showbiz triumph, and Cyrus says it’s due to the good karma she earns by working her tail off and being nice to people.

“Personally I believe in karma because I’ve seen it bite so many people,” she told Alex Jones on the U.K.’s Daybreak.

“You always treat people with respect and be gracious,” she explained. “You make music because you love it and you don’t make it for any self-absorbed reasons, and you treat the people that you’re working with with respect and you work really hard.”

“That’s why I’ve been able to have longevity rather than just having hits because karmically it makes sense.”

Her pal Justin Bieber may want to listen closely to her insight. Cyrus said earlier this week that despite press attention to his bad behavior, he is “still stupid.”

But that’s neither here nor there for the star, who is busy doing this her way. She explained the inspiration for the controversial new video for her song “We Can’t Stop.”

“Right now it’s a different time and it used to be that people just made videos to show on TV and now it’s not as much about being played on TV as it is going viral,” she said.

“So I wanted something that was interesting… and have some sexiness to it but I don’t want that to be the whole thing. I wanted it to be gritty and seem like a house party you’d really want to go to — rather than some set with some fake extras who I don’t have any chemistry with. I wanted it to have a hipster feel to it.”

Watch the video for “We Can’t Stop”