Welcome to the Briggs show! Everyone else is a supporting character. 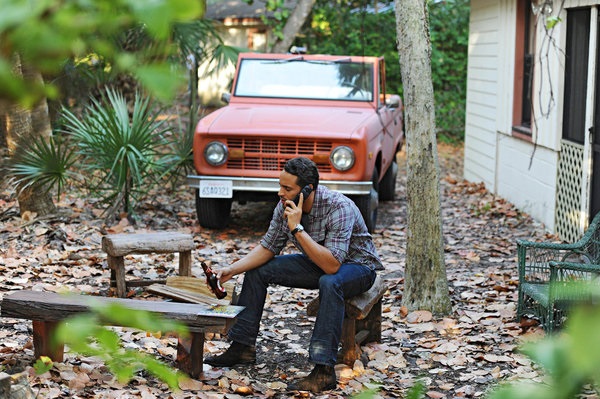 Last week left us with a major cliff-hanger: we found out that Paul Briggs was a heroin addict. Or, well, at least he was going to meetings and saying he was one. This week, we learned a little more about the circumstances.

Related story 8 Celebrities who actually did some good this week

Last time on Graceland: Briggs is a heroin addict >>

Viewers finally learned the previously embargoed information that some of us have known from the very beginning: Briggs (Daniel Sunjata) was tortured. Knowing that, it’s easy to say, “Well, he’s not the first person to turn to drugs to escape the effects of said treatment.” It’s more complicated with Briggs, though. He was tortured by a guy named Jangles (where do they come up with these names?!) while in Mexico. Why was he in Mexico? That’s suspect. What was he doing that allowed him to be caught? Also suspect.

The genius behind Briggs’ character is that I’m still rooting for him. This week he continued with his less-than-boy scout actions when he turned off his mic while on that supposed meeting with Odin. Why? When you add in the years of missing heroin, it begins to look like maybe this mysterious “Odin” is actually Briggs. And yet… I want him to get away with it. I hope that maybe his being Odin is just a very important, deeeeeeep cover for something bigger going on. I don’t want Briggs to leave Graceland. I may be SOL, though, since Mike (the perpetual boy scout) went ahead and told his handler/boss-person about Briggs’ heroin addiction. That was a total face-palm.

Everything you need to know about Graceland >>

I do have one concern with Briggs, though, and that’s his relationship with Charlie (Vanessa Ferlito). He was very adamant that Charlie shouldn’t tell the rest of the house about her foray into heroin use and even seemed annoyed when she finally did. He always makes valid points for keeping the secret, of course. Their lives are their lives and, also, doing drugs is strictly forbidden by the bureau.

Here’s another way of looking at it, though: isolation is a well-known tactic with abusive spouses. I don’t think Briggs plans on beating her. But, I think it might be entirely possible that he enjoyed having someone in the house doing his drug of choice. Perhaps he wanted that so he’d feel safer sharing his secret with her, perhaps he wanted a new buyer or someone else on the inside working with him or maybe he just enjoyed the control he could have over her if she became addicted.

A few other things:

Mike’s (Aaron Tveit) an idiot for telling Abby he’ll be leaving soon. That seems unlikely and, even if it’s true, why bother?

Jakes (Brandon McLaren) has a kid? I’m not gonna lie — this is pretty adorable. If it’s true.

Johnny continues to be my favorite person in Graceland. The only way I can think to describe him is that he’s like the slightly younger brother of your best friend that you secret have a crush on. You know, the kind of situation in middle or high school where he would come in and be a goofball and your best friend would be annoyed or disgusted and you’d just watch in amusement and with big puppy dog eyes. Johnny (Manny Montana) does that to me. Anyone else?