Danny Jones has proposed to his girlfriend multiple times during their relationship and last night she finally decided to say yes. 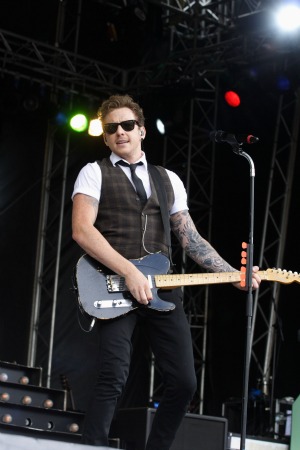 It has been reported that McFly’s Danny Jones has wanted to settle down and become engaged for a long time and last night, he got his wish.

The star’s proposals have reportedly been turned down by his girlfriend model, Georgia Horsley, on numerous occasions.

Last year Jones told the Daily Star, “Girls still ask me out and I’m like ‘No, I’ve got a girlfriend.’ I’ve done my bit for the boys and it was great while it lasted, but I’m well and truly over that now.

“I’ve asked my girlfriend to marry me five times now and she’s said no. So I don’t think we’ll be heading down the aisle this year. It’s a bit of a sore subject.”

It does, however, appear that persistence has paid off for the “Love is Easy” singer, because when he proposed to his model girlfriend last night — again — she said yes and the pair happily announced their good news in the early hours of Thursday, Jul. 26.

Alongside a picture of Horsley flashing her ring, Jones wrote on Twitter: “The future mrs j yeahhhhhhhh!!! (sic)”

Jones’ bandmates, Tom Fletcher, Dougie Poynter and Harry Judd were quick to congratulate him, with Fletcher tweeting, “Super massive congratulations to @Dannymcfly and @GeorgiaHorsley1 on your engagement!!!!! Bloomin awesome news!!!!!”