In this episode of Burn Notice, called “Psychological Warfare”, Michael is finally introduced to the man he wants to meet, but must first endure a multitude of torture techniques to be accepted into the family. 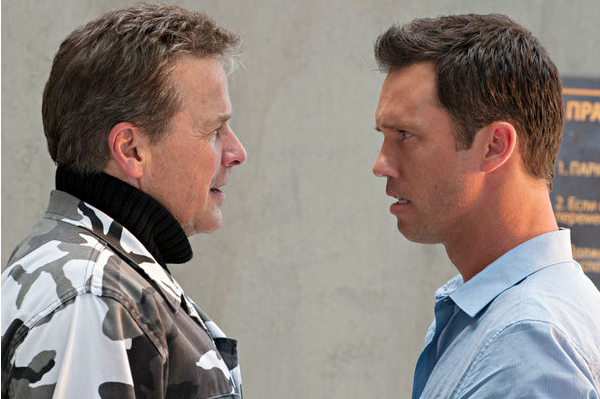 OK seriously, how can this be the final season of Burn Notice? With episodes like this one, I never want the series to end. It seems like every week I am claiming another episode as my favorite and this week is no exception.

After the events of last week’s episode, Michael (Jeffrey Donovan) got himself close enough to Sonya (Alona Tal) for her to agree to let him meet the big boss. Of course she forgot to mention the part where the boss would basically torture Michael, but I’m sure it just slipped her mind.

In order to ensure that Michael was indeed who he claimed to be, James put Michael through every version of physical and psychological torture he could, including sleep deprivation, noise irritation and sensory overload. Michael held up for a while, but once the drugs came out, his resistance dropped and he couldn’t fight off the illusions and phantoms the substances brought with them. Soon Michael was re-living the moment in his career that made him into the man he is today and we got to see just why he has always been adamant that he won’t kill people unless absolutely necessary. It turned out that he once blew up a factory full of people as part of a mission and in that moment, with his life and his team’s lives on the line, he hadn’t cared.

That wasn’t nearly the worst part though. As he became more broken, Michael saw visions of his abusive father. The scene where the man screamed at Michael — while we saw both the child version and the adult version — was so intense that I felt like that needed to be listed as part of the Geneva Convention. It definitely felt like torture to me, though I will admit to enjoying it — from an artistic point of view, that is. Jeffrey Donovan just killed those scenes.

At one point, it seemed as though Michael might have broken and though he couldn’t remember what he said, Sonya convinced him it was bad enough that they needed to escape. But before they could, Michael turned back and confronted James again. Once Michael claimed that he had nothing to hide, James finally accepted him into the family.

Michael went home to recover and there we discovered how he resisted telling the secrets that would’ve killed his friends. He revealed to his mother that it was the abuse from his father that kept him strong. All those years of putting up with his father’s violence had taught Michael how to hold back information. At that point it was hard to decide which was the worse torture for Michael — the drugs and the other stuff, or realizing that his awful father actually helped him.

Michael telling Fi that he and Sonya slept together. Whoa!

“The Geneva Convention doesn’t consider these methods to be torture, but when you’re experiencing them, it sure feels like it.”

Phantom Fi telling Michael that he had to take it because his wasn’t the only life on the line.

Phantom Larry screaming at Michael to use his real words and stop saying “neutralize” when he meant “kill”.

“You knew they were in there!”
“I didn’t care!” — I literally gasped out loud during that part.

Michael admitting that sometimes he heard the screams of the people from the factory in his head.

The way they kept flipping back and forth between adult Michael and child Michael. That was unreal.

Wondering if the appearance of Sonya was another illusion, until the rest of the group saw her, too.

“A man who has no secrets can trust himself.”

Finding out that Charlie wanted to stay with his Uncle Mike until he woke up. Awwwww.

Michael admitting to his mom that he saw his father in his drugged stupor.

“Seeing him wasn’t the hard part, Ma. It was realizing he was the only reason I survived.”

What did you think of this episode of Burn Notice? Were you surprised by what was learned about Michael?