Although they were once friends, it seems Lana Del Rey wasn’t too happy when Lady Gaga hit it big. Del Rey’s leaked demo “So Legit” has some choice words for the momma monster. 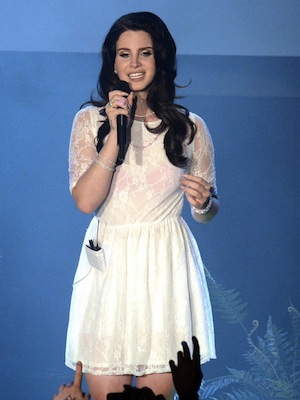 In a leaked demo of the song “So Legit”, it seems that the “Young and Beautiful” singer takes aim at her friend Lady Gaga.

By the way, can I just ask who is doing all this leaking of music online? Music isn’t ever released anymore, it’s leaked by some unknown music leaker.

Anyway, in the leaked song — which Del Rey has neither confirmed nor denied that it is in fact her song— the singer growls, “Stefani you suck/ I know you selling 20 million/ Wish they could’ve seen you when we boo’d you off in Williamsburg/ You’re hurt I know my words don’t hurt, yeah.”

As we all know, Lady Gaga’s real name is Stefani Germanotta and it has been well documented that years ago Gaga and Del Rey used to have the same manager, were friends, hung out together and played gigs together in Brooklyn.

So Gaga was, in fact, born that way.

But the song doesn’t stop there.

Gaga tops the list of Forbes‘ highest-earning celebs under 30 >>

“You’re looking like a man, you’re talking like a baby/ How the f*** is your song in a Coke commercial, crazy/ You called me the queen of the downtown scene, babe/ How the f*** would you go switch it up and then replace me?”

Ouch. So what does this sound like to you? Jealousy? Or perhaps it’s a hurt friend who was ditched when fame came knocking.

How to ditch a toxic friend >>

Reportedly recorded over four years ago, “So Legit” would have been written and recorded when Lady Gaga shot to the top with the success of her 2009 album, The Fame.

Del Rey’s big break didn’t come until 2012 with her record, Born to Die.

Listen to the track below and tell us what you think.