There’s another Hollywood mama-to-be! Kim Fields announced her pregnancy at a taping of The Real earlier this week. It will be her second son. 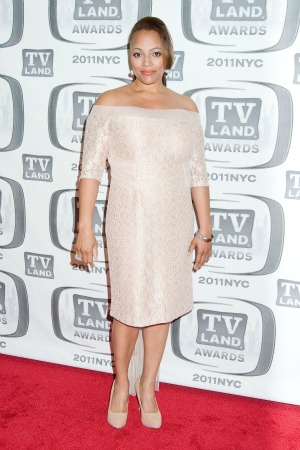 It’s been nothing but babies this week, with the birth of the royal baby and the arrival of Jimmy Fallon, Hillary Scott and Penelope Cruz‘s new bundles of joy. And one more celebrity decided to add some big news into the mix.

On an upcoming episode of The Real, actress Kim Fields revealed that she is expecting her second child with husband Christopher Morgan. The former Facts of Life star shared the news during a taping earlier this week.

Will and Kate debut the royal baby! >>

Fields rubbed her baby bump and told the hosts of the daytime talk show, “This is Quincy Xavier. He’s a boy, yes.”

She already has a 6-year-old son, Sebastian, but the couple has been trying to conceive for several years.

She admitted, “We’re very, very blessed. It was planned. We actually had been trying for a couple of years.”

The husband and wife suffered through two miscarriages, so the news was a welcome relief for them. Even though having another child was on their radar, Fields blamed pre-menopause and the flu for her lapse in memory and clumsiness.

It was her husband who caught on to what was really happening.

Fields said, “…our son got sick with a stomach virus and I caught it. Chris said, ‘No, babe, you’re a little sicker than Sebastian. You need to go and get that checked out’ and I said, ‘OK.’ So I went and they tested me and said, ‘Oh honey, you’re not dehydrated. You’re two months pregnant.'”

The 44-year-old married her husband in 2007. She was last seen on the big screen in What to Expect When You’re Expecting in 2012.