Whoopi Goldberg doesn’t want to hear about the royal baby. On Tuesday, she squabbled with Barbara Walters on The View about the saturation of news. 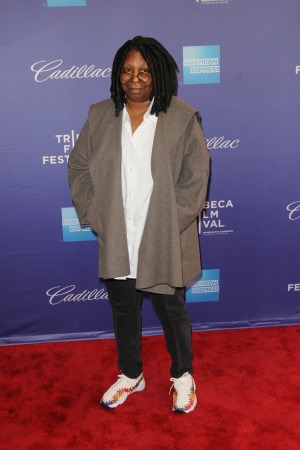 It’s another on-air tiff for the ladies on The View. This time it was between Whoopi Goldberg and Barbara Walters over the hottest topic of the week, the royal baby.

On Tuesday’s episode, the two women did not see eye-to-eye when it came to discussing the Duke and Duchess of Cambridge’s bundle of joy. Walters took some time to promote her 20/20 special on the new arrival during the daytime talk show.

Goldberg interrupted her promotion and said, “People are losing their minds. Do the guys care as much as the women do? Because I don’t care!”

The veteran newswoman was not pleased by her co-host’s disruption and replied, “They may not care, but we’re doing an hour special tonight, okay? People, they do care.”

That still did not keep the Oscar winner quiet.

The 83-year-old made one final plea, but it didn’t seem to do any good.

Walters said, “Whoopi will not be watching. We hope you will and we hope there are a lot of people who give a darn, okay? Because we worked very hard on this.”

“No,” Goldberg said stubbornly. “I’ll watch everything else but not that one.”

Walters ended the argument with a simple, “Whoopi is Whoopi.”

According to the New York Daily News, their disagreement didn’t end there. Supposedly, the actress ranted and raved for seven minutes about Walters after the show about how she can’t wait for her to retire next year.

Goldberg called the paper on Wednesday night to clear up any confusion.

She told the New York publication, “I don’t rant at The View for seven minutes for any reason. That would not have come out of my mouth, especially not at The View. I’m not stupid.”

Whether a source ratted her out or not, the daytime host knew that she needed to correct the situation stat.

The 57-year-old continued, “Dude, she hired me. It is a very good relationship.”

It sounds like your average day on The View set.