The 89-year-old former POTUS is still standing up for what he believes in, and is doing what he can to help a friend’s child who is fighting leukemia. 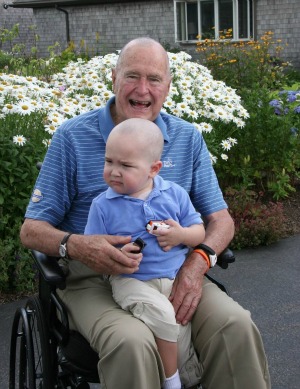 President George H.W. Bush has been out of public office for over 20 years, but he’s made headlines again after finding out a friend’s son is sick.

The 41st President of the United States shaved his head to raise money for the boy’s treatment, according to NBC News. By doing so, he joined the rest of the members of the Secret Service detail in Maine to protect him (the Bushes have a home in Kennebunkport). Patrick is the son of agent Jon, whose last names are not being shared in order to protect their privacy.

Bush, who has suffered health problems of his own, is no stranger to childhood cancer. He and his wife Barbara lost a child to leukemia at the age of 4, almost 60 years ago.

The members of the Secret Service protecting Bush also launched a website called PatricksPals.org to help raise money for Patrick’s treatment. According to NBC, they’ve also organized a motorcycle race in Maine to benefit the cause.

Bush not only shaved his head for the cause, but he and Barbara also made a donation to help Patrick’s recovery.

“The support [Bush] shows to everybody he meets — the people that he works with are lucky,” Hager said on Today. “I’m his granddaughter, and I feel especially lucky.”

She also posted a photo of her bald grandfather on Twitter Wednesday night with the caption, “The most decent man I know.” Hager is out on maternity leave after giving birth back in April, but said she’ll have to come back just for this assignment.

“You know when there’s something with my grandfather, I just have to go,” she said. “I will rub his bald head for good luck.”