Heidi Klum admits that the photographer behind the racy photos she has been posting recently is none other than her own mom.

As a model, Heidi Klum probably got over whatever shyness she may have had when she was younger 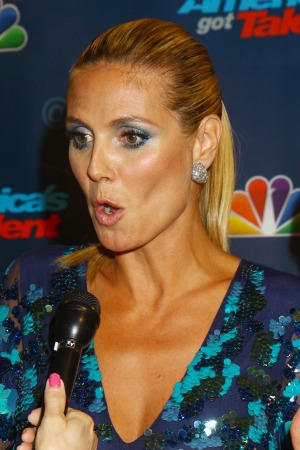 pretty fast. Recently, she proved that fact when she showed off her sunburned bottom in some vacation photos taken around the Fourth of July.

Heidi Klum is physically removing Seal from her life >>

Klum not being shy isn’t exactly a revelation, but you might be surprised to find out who took all those racy photos — her mom and dad. The America’s Got Talent judge spoke to Access Hollywood about the naughty photos.

“You will be surprised when you hear that my mom takes most of the photos,” she said. “Yeah, my mom and dad. They were on holiday. Yes, so my mom can take some good photos.”

As to why Klum is often pictured wearing close to nothing, even in her own vacation photos, she said: “And I’m European. I don’t like wearing tops,” she revealed. “And I don’t like tan lines.”

Sounds like a good enough reason to flaunt your assets all over your social media pages.

While it may not have been exactly her fault, Klum was also part of another controversy concerning racy photos recently. When the posters for the newest season of Project Runway were revealed, the images were found to be too sexy for Los Angeles and immediately banned. The posters depicted a handful of nude models and apparently Los Angeles just couldn’t deal with it so they had to have underwear put on the naked bodies before they could put the posters up around the city. New York City had no such qualms, however, and gladly put up the posters as they were, nude models and all.

Could all of the racy photos and the willingness to go without clothing on public beaches be a part of why Klum has had rocky relationships? Maybe she should learn to keep her clothes on more often.