This sci-fi flick about a futuristic world where the rich live on a secluded space station while the poor toil away on Earth pits Matt Damon against Jodie Foster in this Robin Hood-style action movie with a gritty twist. 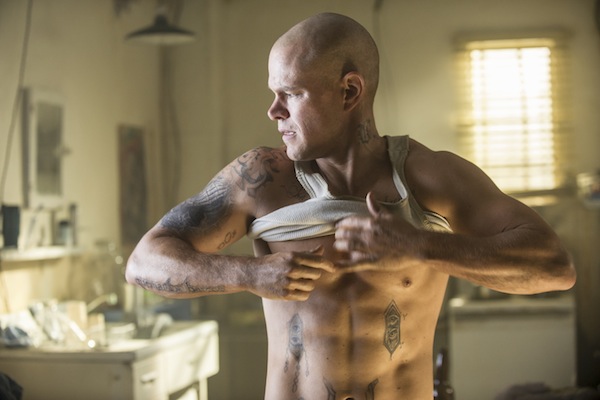 Elysium is Greek for paradise. Matt Damon is English for Greek god. The two go together perfectly in this sci-fi action thriller about a criminal-turned-hero in the search for justice for the tired, hungry and poor.

Picture this: It’s the year 2154 and Los Angeles looks like a shadow of its former self. No more glitz and glam, only factories, smog, peasants and rows of favelas like the kind you might find in the suburbs of Rio. The language of the impoverished is a mix of English and Spanish (no doubt a commentary on immigration and social politics from District 9 director Neill Blomkamp).

Damon plays Max, an orphan-turned-criminal who is just trying to make it to work every day without getting roughed up by robotic policemen. They patrol Earth and keep the poor in check as rich and beautiful Jodie Foster (with a very slick hairdo, we might add) looks on from Elysium, the lush space station that hovers over Earth.

Battle of the flicks: Elysium vs. We’re the Millers >> 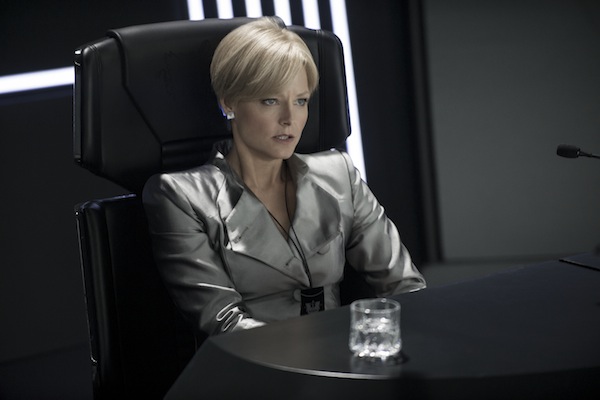 When Max is injured in a radioactive blast and diagnosed (by robot) with five days to live, he’s determined to get a ticket to Elysium, where medical pods cure illnesses in a matter of minutes — everything from face disfigurement to chronic diseases like cancer. All you have to do is lie down in one of these pods for five seconds and bam, you’re cured.

The only way Max can get to Elysium, however, is by joining forces with neighborhood thug and bestie Julio, played by the forever authentic Diego Luna. With a few futuristic alternations (kind of an out-of-body Wolverine look), Damon is ready to take on the establishment.

Covered in blood, sweat and a metal armor that not only accentuates his glorious biceps but makes them even stronger, Damon sets out to steal some brain data from one of the rich Elysium residents, which sounds easier than it is.

EXCLUSIVE: Matt Damon turns on the charm in Elysium clip >> 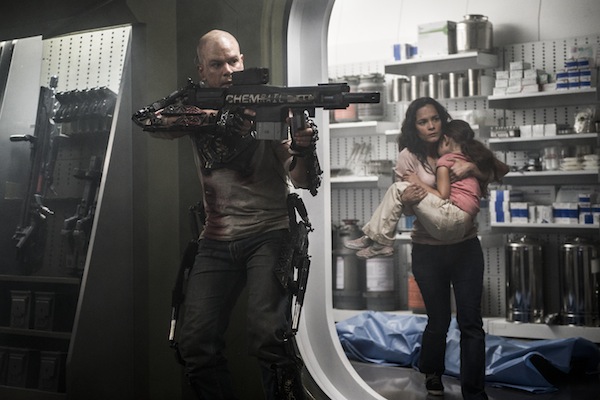 Things get complicated and a bit steamy when he seeks help from his childhood friend, Frey, played by I Am Legend‘s Alice Braga. Damon taps the vulnerability we loved from his Good Will Hunting days, but in the searing body from his Bourne Identity romp to deliver quiet, truthful scenes with Braga. These make for some of the best moments in the film.

The action is impulsive and the stakes are high — life or death for this penniless earthling. The differences between rich and poor are astounding, the visuals magnetic and the story simple: beat the bad guys and save the rest of the world. Sounds cliché, but you’ll root for Damon — we always do.

Bottom line: Elysium has all the trappings of a Hollywood action movie, but Matt Damon’s superb acting and enormous sex appeal make you forget all that. This is one big-budget blockbuster we can finally get behind.

Run time: 1 hour, 49 minutes. No scenes after the credits.