Bethenny Frankel isn’t just a reality TV star — she’s a very successful businessperson and savvy entrepreneur. In addition to being the author of two New York Times best-sellers and the host of a daytime talk show, she’s also the creator of the popular Skinnygirl liquor brand, which sold to Beam Inc. in 2011 for a reported $100 million. 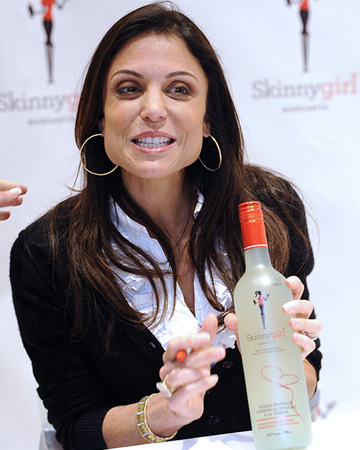 You first came to know her as a cast member of Bravo’s Real Housewives of New York City, but Bethenny Frankel is more than just a reality TV personality. She’s a chef, author, mom, talk-show host… and she’s an entrepreneur.

Frankel came up with the idea of the Skinnygirl margarita — a low-calorie yet delicious cocktail — in her own kitchen. Everyone would want to sip a margarita without all the guilt and all the calories, right? Well, she was right.

Even though big liquor companies turned her down and publicists weren’t interested in the concept, she kept at it until someone finally understood and believed in her idea. That someone was David Kanbar, a liquor industry veteran who went on to become her partner. Together they manufactured the product, designed all the details and got Skinnygirl on the market in an astoundingly short time frame — less than six months.

And then came the success. The company grew faster than anyone — even Frankel — could have envisioned. Women everywhere embraced the idea of the Skinnygirl margarita. It wasn’t a small company anymore, and demand was growing to the point where it was virtually impossible to satisfy.

Just because she sold the company to premium-spirits powerhouse Beam Inc. in early 2011 doesn’t mean she’s a sellout. It was an incredibly smart business move, and Beam let her remain very involved in the company — which was important to Frankel. It was an intelligent decision and an indicator of how much of a success her company had become. What had started as an idea in her kitchen had grown into an extremely popular and coveted brand.

What’s next for Skinnygirl

These days, you can get all the Skinnygirl cocktails that you could ever want — from Skinnygirl Vodka with Natural Flavors to the Ready-to-Serve Cocktails to The Wine Collection. Everything the brand puts out there is great tasting and low calorie, too. You can sip and socialize with Skinnygirl without all the guilt.

Find out what’s next from the brand on Facebook, Twitter, Pinterest and YouTube. As for Frankel, with her kind of spirit, there will always be something new. What’s on tap this fall is the premiere of her new daytime talk show. Look for Bethenny beginning Sept. 9.