The cast of Seventh Son opens up about dangerous lightning and Game of Thrones’s Kit Harington pilfering set props. 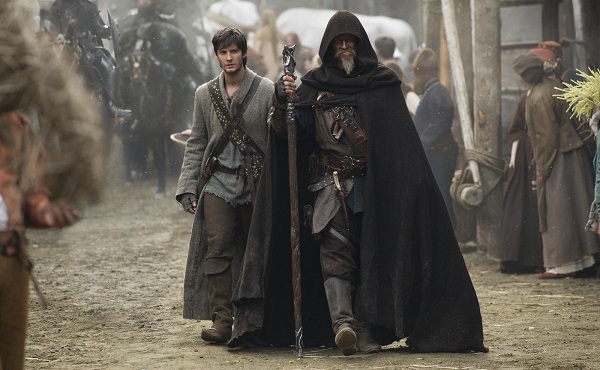 You never know what you’ll hear in a Comic-Con press conference. Sometimes they can be a little tedious and other times they get horribly off-track. The Seventh Son conference proved pretty interesting, though.

To begin, we found out that filming the movie was, at times, pretty dangerous. During filming, the cast had a few run-ins with thunderstorms. They were pretty treacherous.

“And the lightning!” Ben Barnes exclaimed. “Everyone would hide in these 2-foot shrubberies.”

Hmmm. Hasn’t anyone ever told them that you’re not supposed to hide under trees when there’s lightning? We’re glad everyone made it out alive, though.

Not only did Game of Thrones‘s Kit Harington make it out alive, but he also made it out with loot.

“It was this necklace with a little pouch with a miniature Bible in it. It was from China or something,” Harington explained of his favorite prop. “I stole it.”

What a sentimental guy! Apparently, there were quite a few of the little suckers, though, so perhaps just one missing necklace means that somewhere out there is loot to be auctioned off. Why would Harington’s character need the necklace? We’re not sure yet, but we’re certain it has meaning. After all, the movie is about witches and witch-hunters. At one point, Ben Barnes’ character, Tom, must beat a witch to death. Intense.

The story goes that Tom is basically bought by Master Gregory (Jeff Bridges) to serve as his apprentice. Gregory is a witch-hunter-of-sorts and Tom learns the ropes through him, which means tons of stick-fighting and witch/monster-slaying. Why’d Gregory choose Tom? Because he’s the seventh son of a seventh son, and prophesies say he’ll have power over dark magic.

For more movie and TV news, sign up for our newsletter >>

Barnes was quick to tell Comic-Con that there’s actually quite a lot going on in the story, though. “It’s not just about swords and smashing monsters with wooden staffs.”

We can’t wait to watch the action unfold, get a look at that lifted accessory and watch the chemistry unfold between Bridges and Barnes.