Marvel’s preparing us for another round of Thor. Next month, they’ll release a new trailer for The Dark World, which will exclusively debut during YouTube’s Geek Week. 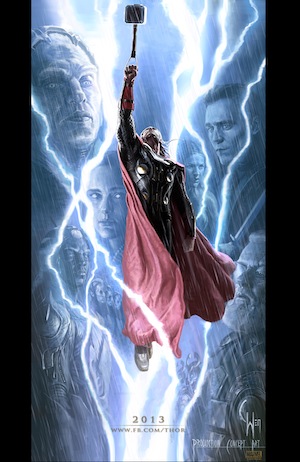 It looks like YouTube is capitalizing on the Comic-Con crowd. Just days after the annual event, they’ve made a huge announcement. The website is producing its very first Geek Week. It will run from Aug. 4–10 and include all-new programming from over 100 YouTube channels.

“With more than half of our top 20 non-music channels dedicated to geek culture, YouTube has become a top destination for fans everywhere to create, share and watch geek content,” said Danielle Tiedt, Chief Marketing Officer, YouTube.

“We’re excited to shine a spotlight on this global community during Geek Week and debut all-new videos and series created by some of our most popular channel partners.”

New movies at Comic-Con that left us stoked >>

Each day will have a theme that coincides with its content. There’s Blockbuster Sunday, Global Geekery Monday, Braniac Tuesday, Super Wednesday, Gaming Thursday and Fan Friday. Out of this bunch, we’re most excited about Super Wednesday.

Mark your calendars because on that day (Aug. 7), YouTube will premiere a new trailer for Marvel’s Thor: The Dark World. It’s rumored to be the same one fans saw at this year’s Comic-Con. We hear it has tons of new footage and feels larger than life.

Are you excited for Geek Week?