Jennifer Lawrence gets starstruck, too! The young actress encountered one of her favorite actors at Comic-Con and immediately went into fan mode. 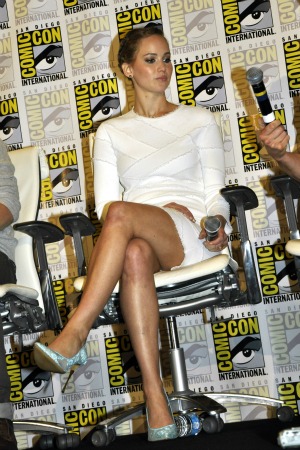 Sometimes celebrities are just like us and they get starstruck. That’s exactly what happened to Jennifer Lawrence on the red carpet at Comic-Con in San Diego last week.

The actress was onsite at the fan convention to promote X-Men: Days of Future Past when she stumbled upon her favorite actor, Jeff Bridges. The adorable encounter was caught by the Extra cameras.

Lawrence is spotted creeping up the red carpet line with her publicist in tow. The publicist then pushes the Oscar-winner towards Bridges as he is being interviewed by E! News.

That’s when the 22-year-old scampers in the opposite direction out of embarrassment. She waves, ducks and shyly says “hi” when the R.I.P.D. actor spots her.

She heads back towards Bridges and immediately gushes, “I’m such a huge fan! Oh my God! I’m so sorry. Sorry, good to see you. I’m so sorry for interrupting you, there’s cameras everywhere.”

An E! News reporter then hands the giddy star the microphone so she can interview her celeb idol.

Lawrence nervously peppers him with several questions all at once.

Her last question referenced Bridges’ role in the 1998 film The Big Lebowski. The actor played The Dude in that movie.

The 63-year-old seemed amused by their encounter, while Lawrence was left awestruck by the moment.

This isn’t the only time Lawrence has been involved with an interrupted interview. After the Oscars in February, it was Jack Nicholson who video-bombed Lawrence during her chat with ABC newsman George Stephanopoulos.